A ground-breaking study into the amount of office space provided by public bodies to trade unions has revealed that many organisations up and down the country are ignoring government advice to restrict the use of taxpayer-subsidised facilities.

Over the last financial year, the total area provided to trade unions was 273,753 square feet, which is equivalent to the size of the Grand Kremlin Palace in Moscow. Despite this space having a market value of up to £27.4 million if it were in Central London, our research was only able to identify £307,093 in rental payments from the unions.

The key findings of the research are:

Many public sector organisations do not provide dedicated office space to trade unions, implying that doing so is unnecessary both legally and practically. This extensive study demonstrates that too many organisations are still subsidising unions. Much of this office space is used for union activity which has led in recent years to large-scale industrial action, disrupting the essential services taxpayers have paid for and rely on.

Welcome government guidance from the Department for Communities and Local Government issued last year said that “political activity by unions should not be financed by council funds” and that “restrictions should be placed on the use of office facilities for trade union representatives” but it is clear that many local authorities and other public sector bodies are still ignoring this advice.

“It’s completely inappropriate for public sector bodies to be subsidising the work of trade unions which take great pride in disrupting essential services, especially after government guidance has told them not to. The drastic difference between the value of this space and the pittance that unions have to pay for it is striking. Taxpayers will be furious at this Kremlin-sized subsidy, especially on top of the amount gifted to unions through facility time and direct grants.” 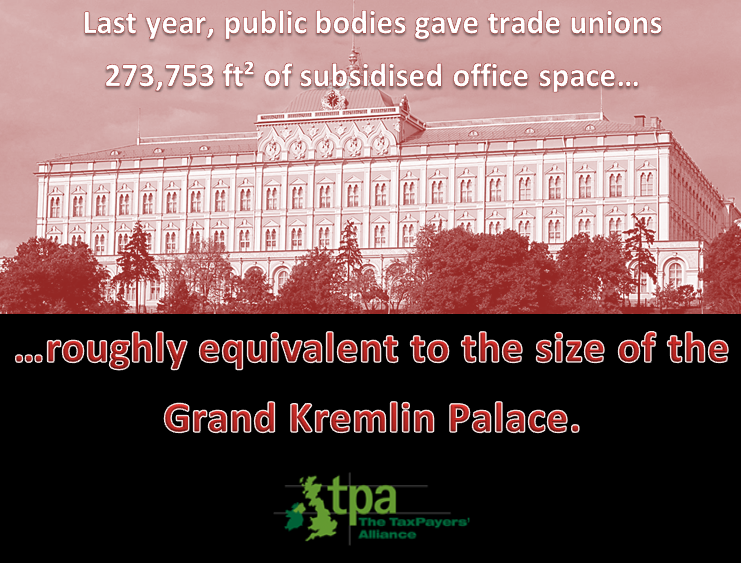