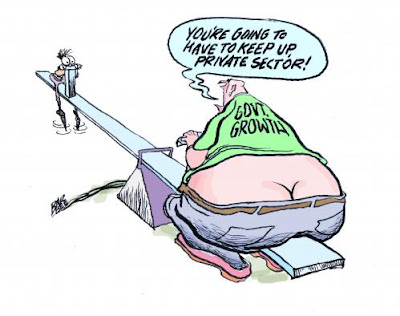 We all know our public sector wastes squillions, but just how inefficient is it? How does it look against public sectors elsewhere in the world?

There are a number of studies that have attempted to answer such questions. One of the best known was published by the European Central Bank in 2003 - Public Sector Efficiency: An International Comparison, by Afonso, Schuknecht, and Tanzi.

The ECB study seeks to compare the outputs of government with their costs. The costs comprise the share of government expenditure in GDP, which is straightforward. The outputs are more difficult to measure, but include a wide range of indicators, from economic growth and stability, to health and educational outcomes (see paper for more detail).

These calculations are done for 23 industrialised OECD economies, and comparisons made.

Overall, the study finds that the most efficient government sectors are those in the US, Japan, and Switzerland.

The UK is by no means the worst, but lags way behind the leaders. Indeed, if our government could achieve the same level of efficiency as the three leaders, we could now save roughly £140bn pa relative to the current level of UK government spending. Which would go a long way towards digging us out of Mr Brown's fiscal hole.

And the study gives a very interesting insight into the relationship between efficiency and size. And guess what - it turns out the most efficient governments are also the smallest.

Here's a chart we've put together comparing each government's efficiency score with its cost as a share of GDP (note: the efficiency scores relate to 2000, and the GDP shares are averages for the previous decade): 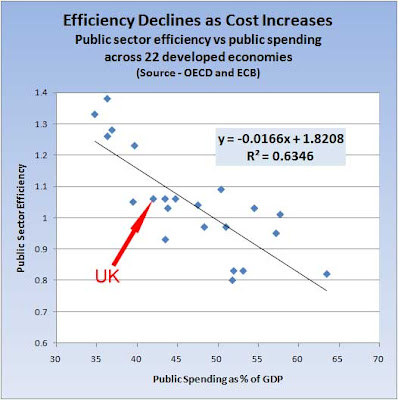 As we can see, efficiency tends to decline quite markedly as government gets bigger. On average, for every 10 percentage point increase in government's share of GDP, efficiency declines by 15-20% (the estimated parameter says 16.6%, but we can't be that precise, especially since this is a simple linear regression).

The bottom line is that if you want to have big government, you have to accept a high degree of inefficiency (aka waste). In our chart, the very biggest government belonged to Sweden, and its efficiency levels were correspondingly abysmal (interestingly, over recent years Sweden has been slimming down its bloated public sector, partly through those school reforms we hear so much about).