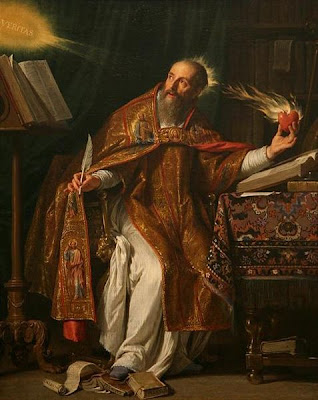 Everybody now agrees that public spending has to be cut significantly. But not everyone agrees on when. And despite what we may sometimes suggest on BOM, not everyone who says we can put it off is an out-and-out scoundrel.

For example, the FT's respected commentator Martin Wolf has repeatedly argued the case for delay. Yesterday he wrote:


"What needs to be done depends on the state of the various economies, with the case for continued stimulus strongest in Europe... That point was made by Dominique Strauss-Kahn, managing director of the International Monetary Fund. He also made another one: if we exit too late, we waste resources in excessive public deficits and debt; if we exit too soon, we risk the devastating shock to confidence of a “double dip”. Given this asymmetry, we should not withdraw stimulus early."


It's a perfectly reasonable argument, but also a dangerous one. Because that asymmetry Wolf highlights is more apparent than real. In reality, it is by no means clear that delaying the cuts keeps confidence intact. Confidence could suffer just as devastating a shock if we delay - as the Greeks are currently discovering. The Greeks are now being forced into a whole raft of emergency cuts precisely because previous delays and prevarication have undermined the confidence of financial markets.

Confidence is a delicate, little understood flower, and what nobody can predict with any certainty is how far we can go with our borrowing before it withers and dies.

As things stand, the OECD says our official debt will reach 94% of GDP by the end of next year (gross debt). Even setting aside the fact that our official debt excludes all those off-balance sheet Enron items like PFI, 94% is very scary. As we blogged here, the IMF recommends we get that percentage down to 60% as a maximum. Anything higher risks the government finding itself in a position where it no longer has the flexibility to increase its borrowing should a future need arise. Which is where Greece now finds itself.

Unfortunately, far from getting our debt ratio down, our rampant public borrowing is currently adding to it at the rate of 13 percentage points pa.

And as we've blogged before (eg here), that borrowing is now feeding back into an alarming escalation of debt interest costs. By next year debt interest costs will consume nearly 10% of government revenue, up from just over 5% as recently as 2008-09. 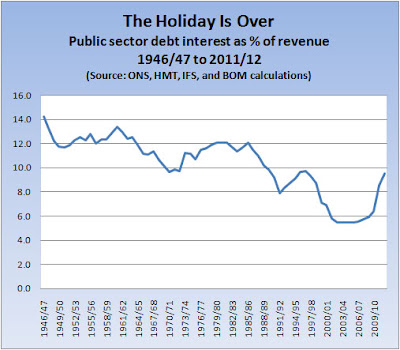 Even worse, that escalation is taking place even though the financial markets have so far remained remarkably patient in terms of the interest rate they charge HMG (ie the yield on gilts). What will happen if the markets lose their patience and push those rates up?

As it happens, the IFS has just published some rather scary estimates of how that might play out (HTP Andrew L). They report a statistical analysis with quantified estimates of how government debt and structural fiscal deficits have affected gilt yields historically. They conclude that if our structural deficit is left at current levels - ie there are no substantive cuts - then gilt yields could "easily reach double digits" by end-2011.

Now, those yields are currently around 4% (10 year gilts), so that is a huge increase. Translating it into debt interest costs, it would mean that our prospective annual borrowing of £150-£200bn would generate additional annual servicing costs of £15-£20bn pa, rather than the £6-£8bn currently assumed. And of course, such costs are cumulative - three years of borrowing at 10% would add £50-£60bn pa to debt servicing costs. Or, £2,000 pa of additional taxes for the average household every single year.

Which is why we need to push on with those spending cuts right away. With our public sector debt rapidly escalating, we can't afford the risk of saying we'll cut but not yet. We need to prove to the markets that we're serious. We need to show we're ready to accept some short-term pain, and that we don't need a Greek-style crisis to concentrate our minds.

As the man in the picture meant to say, 'Grant me chastity and continence, and do it now!'
This website uses cookies to ensure you get the best experience.  More info. Okay