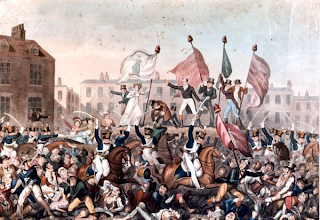 1819 - what happens when government debt gets too high


Are we too worried about the government's spiralling debts? According to some letter-writing economists the answer is yes. They reckon that gross debt of 83% of GDP, increasing at 11 percentage points pa (OECD projections), is perfectly sustainable into some unspecified "medium term".

One of the arguments they use to support this line is that Britain has had much higher government debt in the past, and it didn't trigger a disaster. So let's take a look at the facts.

The following chart is taken from the quite outstanding website ukpublicspending.co.uk. It shows Britain's public sector debt as a percentage of GDP since 2000 (pedant point - yes, there were some coverage and definitional changes through the period, but they don't affect the big picture): 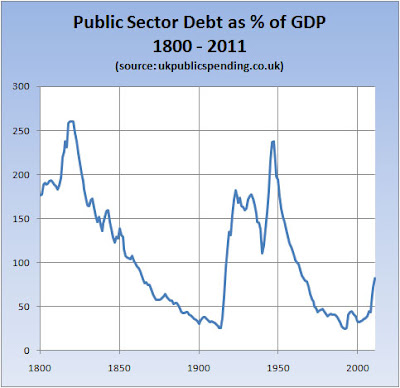 As we can see, by the end of the very expensive Napoleonic Wars in 1815 our national debt had soared to over 250% of national income - an all-time record. It then took an entire century to get it back down to just 25% in 1914. At which point of course, Britain got involved in not one but two very expensive world wars, and the debt ratio soared again, reaching 240% of national income at the end of WW2. Then began another long decline, reaching 25% of GDP again by the beginning of the 90s. And we know the story since then all too well.

There are two immediate points to make. First, all three of the previous spikes resulted from the need to pay for do-or-die wars - we really had no choice. Second, it takes a awful lot longer to reduce debt levels than it does to increase them - debt that takes a few years to incur takes decades to work off.

Still, on the face of it, you might well think the letter-writing economists have a point - we have had much more debt at various points in the past, and we always seem to have survived.

But let's take a closer look at just how previous governments managed to work off the debts.

There are only ever four options:

In his book The Cash Nexus, historian Niall Ferguson estimates how important each of these factors has been over the last two centuries. Up until 1914, while there were a number of debt conversions, most of the work was done by honest-to-goodness repayment and GDP growth. With Britain on the gold standard, the inflation tax played virtually no part.

What a contrast with the post-WW2 period. With the Gold Standard long-since ditched, governments of all complexions let rip with the printing press, and debt holders suffered horrifically. Ferguson estimates that in the half-century between 1947 and 1997, government debt increased by over 1200% in money terms. Yet because of inflation, in real terms the debt actually declined by 27%, which is one hell of an inflation tax.

But although the inflation tax was very useful to HMG for several decades after WW2, it turned out there was a slight problem - after a while debt holders simply stopped trusting the government. Instead, they started demanding much higher interest rates on government debt to protect them against the inflation tax. Which meant that government had to issue even more debt to fund the higher debt servicing costs.

Here's how that played out in terms of the average interest rate on public sector debt over the last 200 years:

As we can see, once investors lost confidence in the government's reliability, their angry reaction pushed the cost of HMG's borrowing way beyond anything that had ever been seen before - even in the panicky conditions of WW1.

Which brings us to the key lesson for today.

Back in the 19th century the government was able to fund its deficit at an average interest rate of well under 4% pa. Investors trusted gilts because Britain was the undisputed hub of the global capital market, inflation was controlled by adherence to the Gold Standard, and successive governments had demonstrated by their actions a strong commitment to fiscal discipline.

Unfortunately, we're not in that world any more. Today, our capital market is just one small piece of a much larger global market, which is quite capable of hiking gilt yields back to double digits faster than you can say William Ewart Gladstone.

And that's why we can take no comfort from the fact that HMG debts today look relatively low against past peaks. Because what really matters is not the quantum of debt per se, but what it costs to service that debt.

The following chart shows how public sector debt interest payments have varied as a percentage of GDP:

Straightaway we can see a big difference from the simple debt chart shown earlier: the peaks from WW1, and especially WW2, are lower. That reflected the government's success in keeping down the rates they paid on their war debt. For example, during WW2 there was heavy reliance on forced saving of one kind or another, which was accepted because, well, there was a war on. But HMG most certainly couldn't pull a similar stunt today.

The big peak in debt servicing costs was still at the end of the Napoleonic Wars, with HMG's interest costs pushed up to around 10% of GDP. On the face of it, that makes our current 3% look comfortable. But we need to remember that the burden in 1815 proved completely insupportable. The heavy taxes required to pay the interest fuelled serious social unrest and a whole series of crises (see picture above). Far from a comfort, it was in fact an unpleasant lesson to all subsequent 19th century governments about the perils of excessive government debt.

And always remember this: today's debt figures hugely understate the true extent of government debt. As we've blogged many times (eg here), unfunded public sector pension liabilities are currently in excess of £1 trillion, and other off-balance sheet Enron items like PFI add a further quarter-trillion. None of those liabilities existed to any serious extent in 1815, which means to get a true comparison we need to inflate today's debt-to-GDP ratio by around 75% of GDP, taking it up to about 150% (thanks to Andrew Lilico for reminding me to mention this - it's so easy to forget).

Drawing this together, the key conclusion is that the past offers little comfort in our current predicament. Yes, there have been periods when our debts have been higher relative to GDP, but the key issue is not the debt itself but the cost of servicing it. And on that, the key driver will be the confidence of markets in HMG's commitment to fiscal discipline and low inflation.

We're right back to where we started, but you might care to reflect on the following grisly calculation.

On the government's own official debt forecast - ie even ignoring the Enron debt - if the market pushes gilt yields up to the same levels we saw in the 1970s, by the middle of the current decade, the debt servicing burden will increase beyond what it was at the end of the Napoleonic Wars.

The tax consequences don't bear thinking about
This website uses cookies to ensure you get the best experience.  More info. Okay