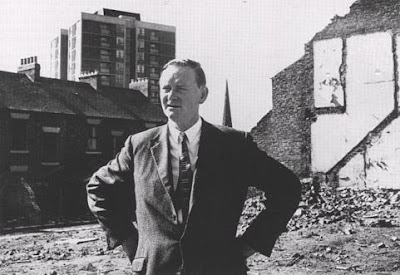 Crooks or Simple Shoppers - either way we lose

Dodgy building contractors have long enjoyed a fruitful relationship with our local councils. Sometimes it's been out-and-out T Dan Smith (pic) corruption, but more generally the problem has been our old friend the Simple Shopper.

Yesterday, the Office of Fair Trading (OFT) announced the outcome of its long-running enquiry into bid rigging among contractors supplying councils and other public sector customers. It has fined "a total of 103 firms £129.5m for colluding with competitors on building contracts", mainly via a practice known as "cover pricing".

The fined companies include some very well known plc names, with big public sector contracts elsewhere - Balfour Beatty, Carillion, Kier, and a host of others (full list here). But despite the guilty verdicts, the fines are relatively small, and none of the contractors has been blacklisted for future contracts.

We've blogged this enquiry before. As the OFT explained it then, cover pricing is:

"...where one or more bidders collude with a competitor during a tender process to obtain a price or prices which are intended to be too high to win the contract. The tendering authority, for example a local council or other customer, is not made aware of the contacts between bidders, leaving it with a false impression of the level of competition and this may result in it paying inflated prices."


It has long been a widespread practice, known to all in the industry. Indeed, when the Chartered Institute of Building asked over 1,000 insiders for their views on industry corruption, it got the following response on cover pricing: 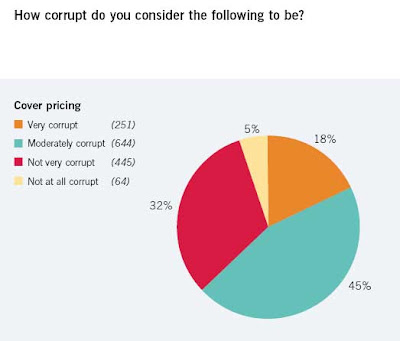 In other words, the practice was so widespread that nearly four in ten insiders reckoned it perfectly OK.


Now, if you're, say,Tescos wanting to build a new store, you know all about this. So you employ people who've been round the loops a few times, and who've got a very good idea what the work ought to cost. And when you send out your tender invitations you only send them out to contractors that you trust to give you proper bids. And just to make sure, you might phone them up and say "on no account should you quote if you do not want the work, and if you take the mickey you will never get a crack at another contract with us ever again; plus, we will dock you 50,000 points from your Tesco Clubcard".


But in publicsectorland it doesn't work like that. In publicsectorland the emphasis is on ticking boxes, not getting good value. And the Simple Shopper in charge of tenders knows he can tick the required boxes simply by publishing a Request For Proposals in the European Journal, ensuring he receives and files at least three tenders, and of course making sure he does not accept any personal douceurs. Job done.


So although these guilty contractors fully deserve their pretty derisory punishments, once again the real culprit is the Shopper. As we've blogged so often, the Shopper is simply not up to being trusted with our money.


And how much have we taxpayers lost here?


As so often, we simply don't know. All we do know is that the OFT enquiry was looking at £3bn's worth of contracts. So our losses could run into hundreds of millions.