Yesterday George Osborne made a very welcome election promise. He told us there would be “no further tax increases in the emergency budget... We’ve set out our plans, they don’t involve an increase in VAT.”

If the Conservatives win the election, in three months time he will have to deliver on this promise, while also setting out a credible plan to tackle the government's soaring debt mountain. In other words, he will have to make substantial spending cuts.

Which is why the Conservatives need to be very careful about adding to the problem already caused by ring-fencing the NHS and overseas aid. Sprinkling around spending goodies like £200m for new cancer drugs may deliver a short-term headline, but it makes fiscal life even more difficult should they form the next government.

We can see just how difficult by taking another look at the history of cuts over the last half century. The following chart shows year-on-year percentage changes in total public spending, adjusted for inflation (TME - Total Managed Expenditure - adjusted by the GDP deflator). And as we can see cuts are very rare indeed: 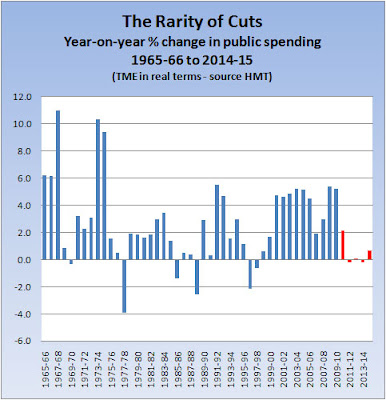 A few key points to highlight:


This record puts the forthcoming task into its full horrific context. Because depending on whose estimates of the structural fiscal deficit you believe, we need to cut spending by between 10% and 20% in real terms - and also, keep it down afterwards. Which is way outside the range of anything that any living Chancellor has ever achieved.

But then, this is precisely the kind of crisis we should have expected, given the way this government ramped up public spending: 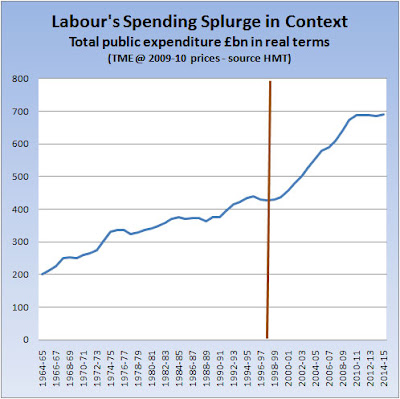 Spending has ballooned to such an extent that even a 20% cut from next year's planned level would still only get us back to the level of spending in 2004-05.

Over the next month, politicians of all parties should try to remember this very simple fact: Britain cannot afford promises of yet more spending.