The sale of gilts (UK government bonds) is the primary way in which the UK government finances its deficits. When the government spends more than it raises in taxes and other smaller receipts, the money has to be borrowed.

However this is not done in way a household typically would. The government doesn’t go to a bank manager and arrange a loan.

Instead, the government sells gilts through the Debt Management Office (DMO) which is an executive agency of HM Treasury.

How does it work?

The sales mostly take place through auctions in which Gilt-edged Market Makers (GEMMs), mostly large banks, are the bidders.

Other operations such as syndicated offerings, tenders, switch auctions and taps are also used, but are far less frequent. 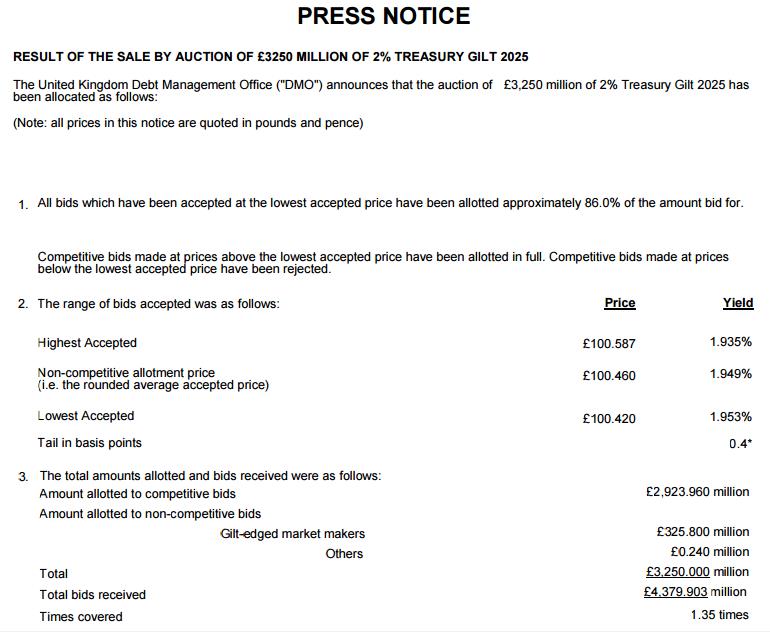 The first line of this press notice, which related to an auction held last week, tells us that the DMO has sold gilts with a nominal value £3.25 billion. The gilts mature in 2025 and have coupon rate of 2 per cent.

In layman’s terms, if one were to purchase a gilt from this auction with a nominal value of £1m, one would receive:

The example above also shows that the gilts were sold at a premium – the lowest bid accepted of £100.42 was more than the nominal value which is expressed as £100. At this price, the “yield” is 1.953 per cent.

So in this instance, the government is borrowing more cheaply than the 2 per cent interest the gilt pays because investors are willing to pay more than the nominal value of the gilts being sold.

This gilts described above are known as conventional gilts, but around a quarter of gilts issued are “index-linked” meaning that the coupons and redemption payments are linked to the Retail Prices Index measure of inflation.

Demand for gilts has been very strong during uncertain economic times as they are seen as an extremely low risk investment.

It’s just as well, as we’ve have to sell rather a lot of them to fund 14 consecutive years of budget deficits with another four anticipated. Lower demand for gilts means our deficits are more expensive to finance.

However there is now concern that demand is falling. As reported by the Financial Times, demand has fallen to a six year low. This can partly be put down to volatility in markets, but also due to the huge issuance of gilts in recent years necessitated by large budget deficits. Between 2008-09 and 2014-15, net issuance of gilts was £867 billion, far more than the market is used to.

The DMO insists that demand for gilts remains strong, and indeed there has not been a failed auction where bids have failed to cover the amount available for sale since 2009.

But reduced demand for gilts means higher borrowing costs and more money being spent on debt interest by current and future taxpayers.

While the DMO can respond to a certain degree by altering the way in which they issue gilts, investors waning demand for our debt further underlines the need to eradicate the deficit.