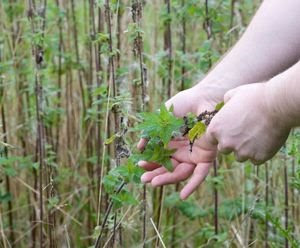 We've blogged public sector pay many times, including the issue of those portly moggies snuggled up in Town Halls and quangos throughout the land.


This week the TaxPayers' Alliance published the latest Town Hall Rich List. Despite our slumping economy, the number of council officials earning more than £100K pa has increased again, to 1,022. And that excludes the value of their index-linked final salary pensions.

We've also just had an extraordinary insight into the staff bonuses now routinely paid by many of these same councils.

According to C4 News, the top bonus paying council is Birmingham, which last year shelled out nearly £10m on them. And C4 almost got an answer to the age-old question of how many council workers it takes to change a light bulb - Sefton Council apparently paid a £21,000 bonus to a highly productive "senior lighting operative". Nice work if you can get it.

As BOM readers will know (eg see this post), public sector bonuses are an expensive farce. Across the whole public sector, we reckon they cost us well over £1bn pa (5.8m employees with an average bonus of c£200 pa). And it's £1bn down the drain.

Because unlike bonuses in the private sector (which can have their own problems - as we've seen), public sector bonuses cannot be linked back to some clearcut measure of success like profit. Instead, they are paid out on the basis of individuals meeting one or other wibbly set of Commissariat targets. Such targets rarely have anything to do with satisfying customers (for a classic example, see this post on the £36,000 bonus paid to the head of the dysfunctional Learning and Skills Council; he got the money because he had supposedly "met all his objectives"; yet last month he suddenly "resigned" for running an organisation so hopeless it's managed to bankrupt half our further education colleges).

Still, the landscape is changing. When the TPA first started scrutinising public sector pay, it took no end of flak for picking on people who are supposedly poorly rewarded relative to the private sector. But with private sector pay now heading down, there is an increasing demand that public employees should share the pain (eg see Camilla Cavendish in yesterday's Times).

Let's remind ourselves of some facts. The story up to last April (the ONS's latest Annual Survey of Hours and Earnings) was that overall public sector pay compared well with the private sector (figures relate to full-time gross pay, including bonuses): 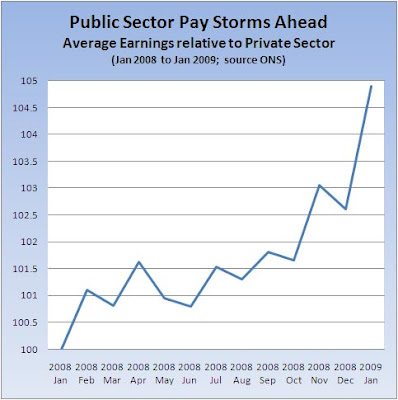 The reason for the increase is that while private sector earnings have gone down by over 1% - reflecting pay cuts and the shredding of bonuses - public sector pay is still merrily bounding ahead by an average 4% pa.

And it's no good arguing (as eg Polly Toynbee does - see here) that this is simply correcting for some longer-term public sector shortfall built up during the boom. We can see that by looking at the same chart stretched out over the last decade: 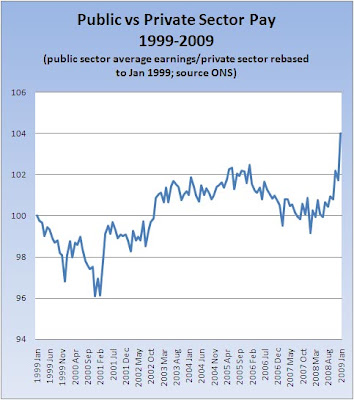 So overall, public sector employees did not fall behind during the go-go years.


Yet now, their earnings apparently remain immune. The pain is all being heaped on the private sector.

No wonder people are talking of "pay apartheid", and calling for Labour's three-year public sector pay deals to be reopened: with the country facing an unprecedented squeeze, this is an unfairness too far.


Taxpayers should insist on these deals being renegotiated. With the public sector pay bill running around £160bn pa, a 2-3% pay uplift costs us £3-5bn. And it's cumulative - after three years, the additional annual cost is running at £10-15bn. Or 3-4 pence on the standard rate of income tax.


It's yet another nettle for George Osborne to grasp on Day One.


And let's hope he and David Cameron have got A Plan for dealing with the inevitable public sector strikes (see this post).