Hitting the 0.7 per cent aid target misses the point

Yesterday the NAO released a report on the trends in UK Official Development Assistance (ODA, which confirmed that we have hit our 0.7% of GNI spending target.

But foreign aid has a poor track record. TPA research showed that development aid is doing little to improve freedom in lower income countries but criticism has come from far and wide, including Angus Deaton, the recent recipient of the Nobel Memorial Prize in Economic Science.

Deaton argues that while aid may temporarily alleviate the symptoms of poverty through donations to foreign governments or by providing schools or hospitals etc. it fundamentally undermines the nascent state. This is because it breaks down or hinders the development of the social contract that should exist between state and citizen.

The situation of aid giving cannot go on forever – incidentally, if it were to, it would imply that it makes no difference - and so the recipient government must develop the ability to raise tax revenues to finance its expenditure programmes. So foreign aid, and simply giving the countries things they immediately need, reduces the need for government to be legitimate, to tax and ultimately to win the trust of its citizens. So development aid masks the underlying problem.

When we learnt that in 2014 the UK managed for the second time to spend 0.7 per cent of GNI on foreign aid (a whopping £11.8 billion) there is little to celebrate. This sum does include £866 million of humanitarian assistance which is justifiable, but to put it in context, stamp duty on homes raised just under £11 billion in 2014-15. So were you to scrap development aid you could forego all of the revenues from stamp duty and have enough left over to afford humanitarian assistance.

The chart below shows how all of that money breaks down within DfID. 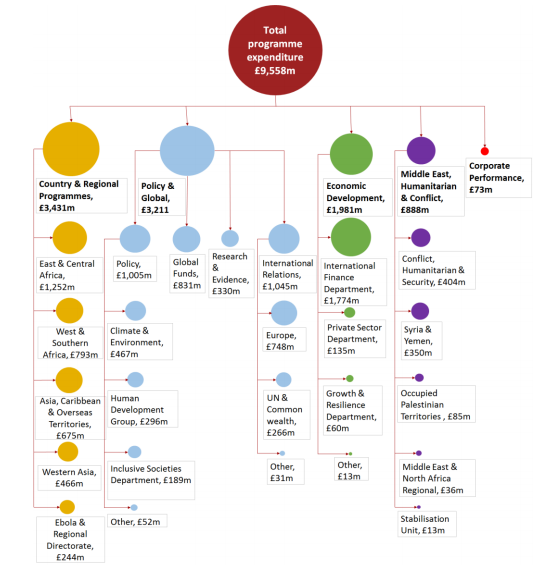 A large minority (41.7 per cent, or just shy of £5 billion) of UK ODA in 2014 was via multilateral organisations, although the proportion has fallen risen from previous years. The major routes for this ODA were The World Bank, the EU (which spends a further £440 million of UK taxpayers’ money on aid through our budget contributions) and the UN. There are many layers to this sort of bureaucracy and one wonders at the cost of administration.

A great deal of taxpayers money is being sent around the world and while some of it will do good money is certainly wasted. And there are very real concerns that this aid money simultaneously holds back the countries it is trying to help.

It is clear that we should end the ring fencing of aid spending at 0.7 per cent of GNI. That we will spend this much in perpetuity implies that our mission will never end, which implies that the goal is either constantly shifting or we are never going to succeed. And were our GNI to magically double overnight would it mean that the amount we needed to spend should double? Asking this question shows how ridiculous spending targets are in general.

And suppose you hear that the government is giving all of this tax revenue away: would it make you more or less likely to donate? Empirically the latter is shown which suggests that it is the smaller, less institutionalised charities that lose out as a result. The British public is incredibly generous, funding all sorts of things including aid charities, but it is much easier for them to do so if you leave that money in their pocket. What’s more this generosity is not included in the 0.7 per cent target, so the UK’s real contribution is actually significantly higher.

Most importantly, there are credible alternatives to aid spending. The old mantra of ‘trade not aid’ is fundamentally true but there are other ideas to consider. Institution building is one of them – helping and advising governments to develop democratic processes and fight corruption. With this framework the capacity to grow a business and create jobs and wealth is much more achievable than it was before.

What’s more, our huge aid budget is relatively tiny compared to global wealth transfers. £11.4 billion pales in the shadow of remittances sent to developing countries which are now worth around $440 billion. Indeed in Bangladesh (one of our major aid recipients) $13.9 billion was sent home in 2013 – the amount we give Bangladesh bilaterally is £181 million. If giving cash to lower income countries improves conditions, is it going to be UK taxpayers who deserve the majority of the credit or the people who work and then send money home?

So, unfashionable it may be to suggest, but we should scrap the 0.7 per cent target and reconsider our whole approach to aid. While we have a £70 billion budget deficit we shouldn’t waste money on something that delivers such poor returns.