News broke late last night that the Head of the Electoral Commission, Peter Wardle, would be leaving his post in the near future thanks to choosing to take early retirement. He will leave the job with - brace yourself - a £320,389 'golden goodbye.'

The Sun featured our comments today:

Taxpayers will be furious at this extraordinary golden goodbye. When we're trying to save money everywhere else, such obscene payouts are simply unacceptable. We have to see an end to these lucrative leaving presents, especially when people are choosing to take early retirement. 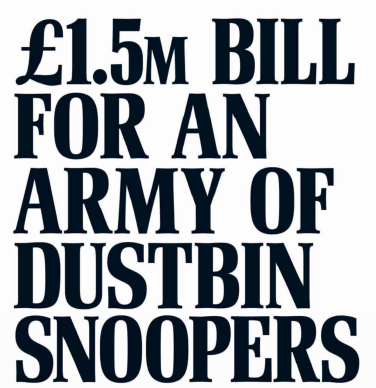 Meanwhile, north of the border in Scotland, it emerged that Scottish councils are spending more than a million pounds to hire an army of waste officials to rifle through families' bins. As Eben Wilson, from our sister organisation TaxpayerScotland, says in today's Daily Mail, "we are headed for a world in which everyone is told what to do by yellow jacket-wearing bureaucrats. This is just creeping state intrusion and we must step back from it."

We might add that these bin investigators don't come cheap. And when we're trying to make savings, is this really a priority?