It's been a busy few days for us in the media. 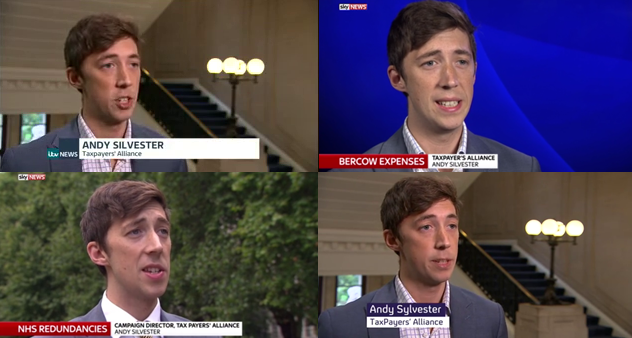 After Andy Silvester, our Campaign Director, appeared on Friday on Sky News, ITV News and Channel 4 News to discuss the Speaker of the Commons' expenses, he again ventured to the Sky News studio to discuss revelations that the NHS has spent some £1.8 billion on redundancies since 2010. This spending includes many redundancy payments paid to individuals that are later re-employed in the NHS. Andy criticised the "revolving door" at the top of the NHS, and urged the Government to act. You can see his interview here.

Meanwhile, news emerged that the Welsh Government has appointed a £95,000 "tsar for the future" - tasked with ensuring that government decisions today don't adversely affect the next generation. An admirable goal, but shouldn't they already be making sure that they don't hinder tomorrow's taxpayers with today's decisions? We were quoted in the Daily Star and the Western Mail.

Lord Sewel has also been in the news, of course: of interest to us was his claim that some of his almost-a-thousand fellow Peers were turning up to the House of Lords simply to claim their daily allowance and not doing an awful lot of work. Andy Silvester told the Daily Mail:

We have to have proper checks and balances to ensure that everybody claiming a daily allowance is working for it, and the Parliamentary authorities must take a more active role in reminding peers of their responsibilities when claiming. Taxpayers will be keeping a close eye on the second chamber - it's crucial that it keeps the Government honest, but there will come a point when the sheer size of the House makes that difficult.

There were two more depressingly familiar stories of questionable aid spending in recent days, too. Serious questions have been asked about the amount of taxpayers' money diverted by DfID to the Clintons' family foundation: potentially as much as £50 million. It appears that the sum was in large part approved in order to meet the Government's aid spending target of 0.7 per cent of GDP. Jonathan Isaby described the aid target as "ludicrous" in the Daily Mail. The Sun revealed that the BBC spends £3.5 million on foreign aid, too. As Jonathan told the paper, is that really what the Licence Fee is for?

Considering what other government departments put in to the BBC's charity, questions must be asked about whether they should skim off the top of the licence fee too.

The Daily Express also reveals today that computers in Parliament have attempted to access so-called "adult" sites some 247,000 times in the past year. The figures are no doubt inflated by "pop-up" adverts, but it's nonetheless a huge figure. You can read Jonathan's comments on the matter here.