by Harry Fone, grassroots campaign manager at the TaxPayers’ Alliance

Through the 1970s and 80s, inflation was a major issue in Britain. Inflation peaked at 24 per cent in 1974 and hit a low of 0.37 per cent in 2015. In 1997, the Bank of England (BoE) was granted independence by then chancellor Gordon Brown and inflation has not exceeded 4 per cent since. As a result, inflation rarely features in the political debate.

As intended, this central bank autonomy has created low and stable inflation (typically valued at 2 to 3 per cent). Indeed, if the BoE misses its target of 2 per cent by plus or minus 1 per cent, it must explain to the government why this happened. 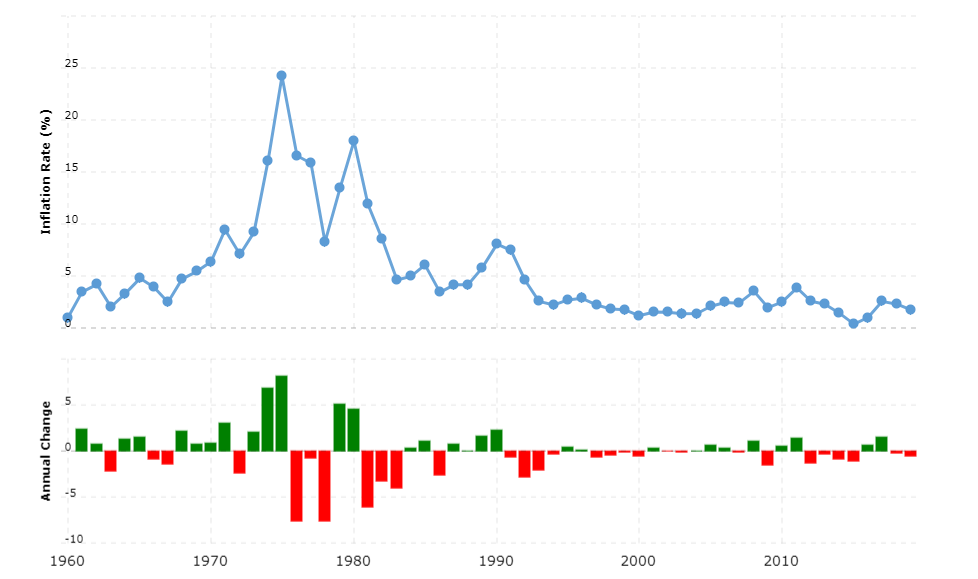 At the time of writing, inflation sits at 0.4 per cent; as measured by the Consumer Prices Index. But what does the future hold? Could there be deflation (i.e. negative rates) or perhaps runaway hyperinflation given the huge amounts of borrowing and public spending we have seen in the last year? Venezuela recently issued a million Bolivar banknote as a result of hyperinflation. The currency has lost 99.999 per cent of its value in the last six years. And what is the value of this seven-figure banknote? Just 36 pence in the UK.

But while hyperinflation is unlikely to occur on our shores, there is concern that rising inflation could act as a stealth tax on unsuspecting consumers - especially now that chancellor Rishi Sunak has frozen personal allowances thresholds until 2026. I spoke to TaxPayers’ Alliance chairman and former treasury economist, Mike Denham, to discuss inflation and the unseen (and potentially devastating) effects it can have on a nation’s economy.

Harry Fone: Why is a small rise in inflation generally considered good, but large rises bad?

This low and stable inflation is good because as economists say it “oils the economic wheels”. Take wages for example - it’s far easier to get someone to adjust their wage levels by having their money wage frozen. It’s much harder to get someone to accept a pay cut if inflation went negative, i.e. deflation.

High rates of inflation are generally considered bad because people on fixed incomes suffer; pensioners are the most common example of this. A lot of financial pressure is exerted on some of the most vulnerable groups in society. Additionally, high inflation will undermine people’s confidence in the value of money. Consequently,  the economy stutters and economic efficiency falls.

Harry: Is inflation a stealth tax?

Mike: Broadly speaking, yes it is. Rishi Sunak’s freezing of personal allowance thresholds for income tax will lead to fiscal drag. If you don’t adjust thresholds with rising inflation, then the tax take goes up.

Harry: And how can people mitigate against the effects of this?

Mike: It’s difficult. Any money that savers put in a building society is being eaten away. Some people choose to put money into the property market - buy-to-let properties often being a popular choice. Many feel this will give them a better chance of staying ahead of inflation. Basically, you need to put your cash into something that will go up in value. But there isn’t a silver bullet. High inflation discourages savings - assuming that the interest rate is lower than the rate of inflation.

Harry: Is there an ideal level for interest rates and inflation?

Harry: Who benefits from inflation and who loses out?

Mike: Broadly speaking, any debtor is likely to benefit. Anyone who is a saver is likely to lose out. But as previously discussed, it does depend on the interest rate. For example, if interest is at 15 per cent and inflation at 10 per cent, then savers still benefit.

During the 1970s, interest rates didn’t keep pace with inflation and savers were very badly hit. Then things went into reverse as a result of strong anti-inflation policies by the government. This led to ballooning debt interest rate payments. At various times during the mid-eighties, the proportion of government revenue going into debt repayment went above 10 per cent; compared to a mere 3 per cent today.

Harry: What factors have had the biggest effect on inflation in recent years?

Mike: Inflation has been coming down throughout the western world since the 1980s, and in the last ten years it has been very low indeed. The globalisation of the world economy has increased competition and kept consumer prices low for manufactured goods. At the same, time trade unions in many countries have lost a lot of their power. The Bank of England is trying to increase inflation again as a rate of less than 1 per cent is not considered a good thing!

Harry: Given Britain’s debt is now over £2 trillion, £9.6 trillion when you factor in other liabilities, many people may wonder if governments deliberately inflate the currency to help pay off debt?

Mike: It’s certainly been known in history. Governments used to debase currencies made up of precious metal. Gold or silver coins would be made smaller or mixed with cheaper metals. However, one of the reasons Western countries made central banks independent was to avoid suspicions that they would inflate the currency. By and large, Western governments do not do it intentionally.

Harry: How likely is it that Britain could end up with runaway inflation or hyperinflation like Venezuela?

Mike: It’s always possible. In the 1970s, economists were very concerned. Inflation was at 25 per cent and accelerating. The government at the time introduced prices and income policies. This meant they could limit private sector pay rises and even set the price of goods, but that sort of thing leads to all sorts of inefficiencies.

Commercial banks have a huge amount of cash deposits at the Bank of England currently. They could start lending that out and create a big expansion in the amount of credit that is available. The economist Milton Friedman argued this was a big driver of inflation, with too much money chasing too few goods.

Harry: Ok - so how do you control massive rises in inflation?

Mike: It’s massively difficult. There is no simple switch you can throw. In the 1980s, the government brought it under control by ramping up interest rates, gradually reducing the money supply and amount of debt in the economy; all coupled with tightened fiscal policy. But it’s seriously painful to the public with companies going bust and rising unemployment as a result. Those results could be devastating.

What does this mean?

As Mike explains, it’s clear that inflation can act as a stealth tax, and high inflation can be particularly damaging to a country’s economy. There may well be stormy waters ahead for the UK. The government has borrowed billions in recent years, and not just to pay for the effects of the coronavirus. Since the early 2000s, Britain has run a budget deficit, but the interest payable on that debt has fallen as a result of record-low interest rates.

That leaves us rather exposed to the dangers Mike outlined. As the chancellor Rishi Sunak has acknowledged, if interest rates increased even by a small amount (as a result of rising inflation) then Britain would see its debt repayment bills shoot up by billions.

Inflation matters - for taxpayers, employers, employees, savers, and for the health of the economy as a whole. The Treasury is right to keep it in mind.