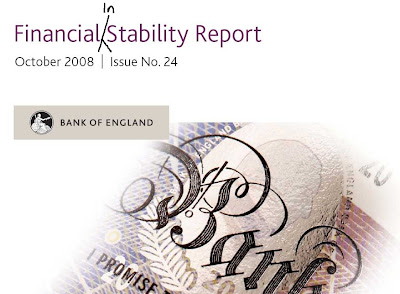 The government's line is that entirely out of the blue we've been hit by a tsunami from across the Atlantic. It's an act of God, and the "responsible" thing now is to throw up a mountain of public borrowing in the hope we can clamber above the waterline.

But despite the glowing international press Mr Brown initially got from his bank rescue plan, it's now becoming clear to everyone that Britain had become especially vulnerable to a tsunami. And the man primarily responsible for that is none other than Mr Brown himself.

There are two major charges (both blogged extensively on BOM):

"The UK, under Chancellor of the Exchequer Gordon Brown became a lead player in the regulatory race to the bottom through which nations tried to poach financial service industry activity from competing national centres or to stop their own financial enterprises from relocating abroad...


Second... he switched to a relentlessly expansionary fiscal policy in New Labour’s second term... As a result the economy is faced, right at the onset of the recession, with an unsustainable structural fiscal deficit...


He has left a ruinous legacy of financial instability and lack of fiscal restraint at home."

We can look more closely at that regulatory issue, using some very helpful charts from the Bank of England's Financial Stability Report published today.

First, on Mr Brown's watch, Britain's major banks hugely expanded their lending and other investments. Between 2001 and 2008 they tripled - tripled! And the fastest growing ingredient in this wobbling blancmange was not traditional bank lending with which the bankers were familiar, but securities investments which were something very new to them (at least, very new to their senior management): 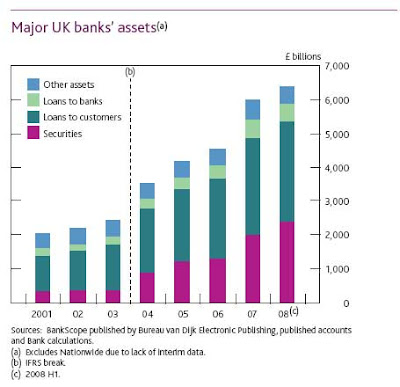 Second, on Mr Brown's watch, our major banks became far more highly leveraged - ie their ballooning loans and investments were supported by less and less equity. In 5 years, the typical UK bank went from leverage of about 20 times up to around 30 times - a huge increase. And the authorities even allowed one major bank to reach a leverage ratio of over 50 times - ie its always risky loans and investments were supported by less than a 2% equity cushion to cover against defaults: 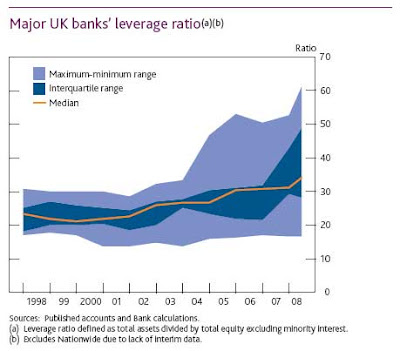 Third, on Mr Brown's watch, our major banks developed an unprecedented reliance on wholesale money market funding in preference to traditional deposits from customers. When he took over, customer loans were more or less entirely funded by customer deposits. But a huge funding gap has opened since then, and this year, the typical bank needs to fund 40% of its customer loans in the flighty frozen wholesale money markets. In the most extreme case (presumably Northern Rock), the funding gap is 80%+: 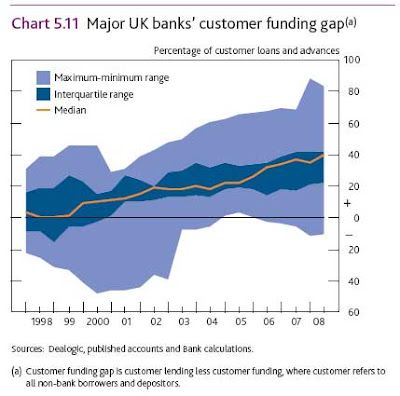 The Bank of England report contains a stack of other jaw-dropping material, but the point is made: it was on Gordon Brown's watch that our High Street banks went from being boringly tsunami-proof to being more like baseless fabric, just waiting for a good puff of wind.


His half-baked regulatory system totally failed to manage the mounting risks, even though it was clear our banks were exposing themselves to positions far beyond anything they were used to. He was reckless not just with our public finances, but also our personal savings and the very bedrock of our financial system. Taxpayers will be paying the price for many years to come.