Central government spending soared by 4.9 per cent to £52 billion in June 2011, up from £49.5 billion in June last year according to Office for Budget Responsibility (OBR) figures. The higher than budgeted figures led to an increase in public sector net borrowing from £13.6 to £14.0 billion. Tax receipts also rose, but not as rapidly as government spending. Nida Eli of the Ernst & Young Item Club said:

"The government still has a very long way to go in order to meet its target of reducing borrowing by £20bn this year. With nine months to go it needs to reduce borrowing by more than £2bn a month compared with last year’s figures."

The figures show a large gap between the terms of public debate on spending and the facts. With the official Consumer Price Index of inflation at 4.2 per cent in June, spending is still rising even after adjusting for inflation. The so-called cuts simply aren’t happening and that is dangerous for two reasons: high public spending is holding back the economy and the enormous borrowing means we risk runaway debt service costs and, ultimately, a sovereign debt crisis. 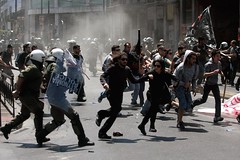 Britain has a debt problem. It’s not as bad as Greece’s; our official debt is approximately 80 per cent of the economy compared to 140 per cent for Greece. The average ‘maturity’ of our debt, the length of time left before we are obliged to repay it, is also much longer meaning that in each year a smaller proportion of our debt needs to be refinanced with new debt. But the scale of our borrowing problem is very similar to Greece’s and, unless we tackle our massive borrowing problem, our debt problem might soon look a lot more like Greece’s than we’d like it too.

The Government must act now to reverse the rise in spending and bring borrowing back down not just to the Government’s own tame budgeted proposals, but lower still to create room for tax cuts and growth in the private sector. The credibility of the Government’s spending plans is at stake and if capital markets stop believing the Government’s promises to keep spending under control they will become more nervous about the possibility that their loans might not be repaid. That means they will demand a higher rate of interest to make up for the increased risk. This in turn means higher government spending which can easily turn into a downward spiral (of higher spending on interest and worries about higher spending leading lenders to raise interest rates) into the kind of sovereign debt crisis now engulfing Greece.

Bold cuts to public spending are needed to avoid following that example. Britain’s taxes are already too high and too complicated. The only answer to the borrowing problem is in spending control. But reducing spending will boost the wider economy too, not just the public finances. More public sector spending means more resources being allocated by the public sector according to politicians’ priorities and bureaucrats’ convenience rather than consumers’ actual wants and needs. And that leads to slower growth in the economy and a less prosperous society. While they are always difficult at first for those whose jobs are lost or whose incomes are reduced, over time spending cuts lead to growth in the private sector and the economy as a whole.