As we've blogged already, having crashed through its own 40% debt ceiling, the government is now grasping at some OECD debt statistics which seem to show them in a more favourable light.

Lord Adonis did precisely that on last week's BBC Any Questions, telling us that the OECD figures for net government debt not only show it's been cut under Labour, but it's now far below many other countries such as Japan.

The implication is that Gordon Brown's 40% limit was super SUPER cautious, so we shouldn't worry about having to go above it in these unprecedented times. Which is pretty much what the Prime Minister himself told us this morning as he signalled the end of the Golden Rule.

What's the truth? As always, we need to examine the statistical entrails.

Start with the OECD stats. They publish two series for government debt as a percentage of GDP - gross debt, and net debt after taking account of the government's financial assets.

Here are the UK series: 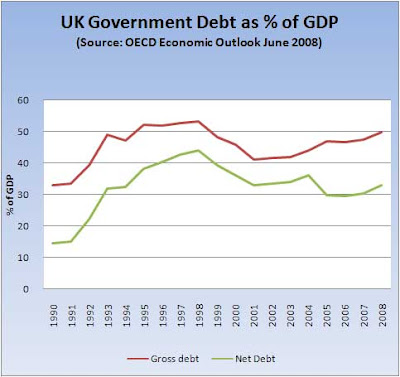 A couple of points to note. First, it's true that since 1997 both gross and net debt have fallen relative to GDP. But as we blogged here, the OECD has not yet updated its numbers for any of the bank take-overs, or the latest recession borrowing surge. The OECD's updates to be published in December are likely to hike the 2008 figures significantly.

Second, although lower than 1997, both gross and net borrowing are hugely above the levels we had going into the last recession in 1991. And that despite the longest economic boom since records began.

Now let's look at the international comparison, both against the overall OECD average, and the average for the Euro area (taking 2007 as the latest complete year): 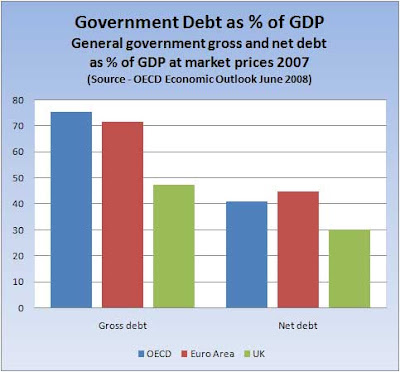 Again, on the face of it, the government is right: on both the gross and net measures, the UK looks a lot less heavily borrowed than the rest of the developed world.

But what the government doesn't mention is that the OECD's figures contain a lot of apples and pears. Indeed, there are so many, the OECD attaches explicit comparability warnings to its published data tables:

"Gross debt data are not always comparable across countries due to different definitions or treatment of debt components...


... Net debt measures are not always comparable across countries due to different definitions or treatment of debt (and asset) components." (and see detailed methodological notes here).

In particular, some countries include part or all of their public sector pension liabilities as debt, whereas the UK government notoriously does not. Their inclusion alone would increase the UK's debt/GDP ratio by 70-80 percentage points, taking us to around 120% on the gross debt measure and over 100% on the net debt measure. And that's even before taking account of £100bn + of PFI liabilities (again, not counted in the official debt stats).

There are other major differences too, like what counts as an asset to net off against gross liabilities to give net liabilities. For example, the UK figures net off our gold and foreign exchange reserves, whereas others don't seem to.

And over the last few years we've suddenly started netting off some other major "assets" to push our net liability total down. We can see that by calculating the difference between our gross and net liabililties (purple line): 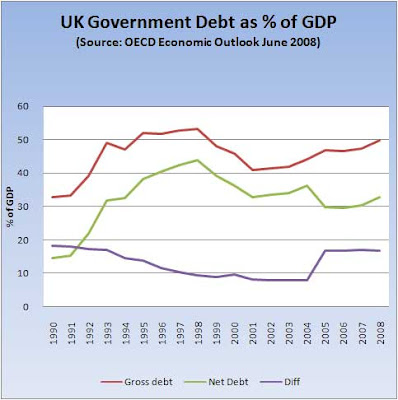 Why? The OECD summary tables give no clue. But judging from the size of the jump, our guess is that it is the £100bn + chunk of local authority assets which the ONS opaquely labels "Other UK equity" (ONS data series HN69 - FinStats Table 12.1M). But what are the underlying assets? And since they don't appear to be traded equity, how are they valued? Are they in reality highly illiquid investments such as social housing?

We will investigate further, but we are highly suspicious. How convenient it was for the UK government to suddenly find an extra £100bn of "assets" just at a time when its debt was taking off. And we wonder what else lies hidden in the OECD numbers.

The issue of public debt is now centre stage. There is no doubt that Labour's Big Government instincts are propelling us towards all manner of "Keynesian" spending projects, and our debt is set to soar.

But at least let's keep our eyes open. Don't let's get fooled into thinking more debt will be relatively painless because we've got so much less than other people. We haven't.

(Just to remind you, BOM's last estimate of the Real National Debt - PFI, public sector pensions and all - was £1.8 trillion. Or 130% of GDP. Or £74,000 of public sector debt hanging round the neck of every single household in Britain. But that was before the mass wave of bank nationalisations...)