Watch any government minister being interviewed on TV these days, and you can play a game of politics bingo. Any mention of the NHS, they’ll start on about extra X billions - tick. Why are public finances in a mess? Well, there was the covid pandemic you know - got that one! Government finally sorting the public finances then? Ah yes, we’re taking very difficult decisions - bingo!

The humdrum of repetitive questioning and shallow answers goes on, and we’re none the wiser. Rarely is a politician asked to engage the details. But dig a little deeper, and there are far better questions to answer. Like, for example, is the government really getting a grip on public spending?

Our recent briefing on government spending lays out the details. In 2022-23, total managed expenditure is projected to rise to £1.2 trillion (47.3 per cent of GDP), up £135 billion from the previous financial year. It rose by 13.4 percentage points of GDP between 2019-20 and 2020-21, the fastest rise in peacetime history. That’s the impact of covid the politicians talk about, and rightly so.

As TPA researcher Dr Mike Jones explained in a brilliant Twitter thread, Britain’s spending as a percentage of national income is now higher than it was during both the winter of discontent and the aftermath of the great financial crisis of 2007-2008.

But does that mean, as the politicians infer, that efforts to tackle high levels of spending have been as robust today as they were after previous crises? Let’s look at the details. Six years after spending peaked in 2020-21, it will remain at 44 per cent of GDP. By contrast, seven years after the early 1980s recession and the great financial crisis of 2008-2009, spending had come down to 37.2 and 41.1 per cent of GDP, respectively.

Chart 2: total managed expenditure as a proportion of GDP in the six years following the peak-spending year of selected crises (%) 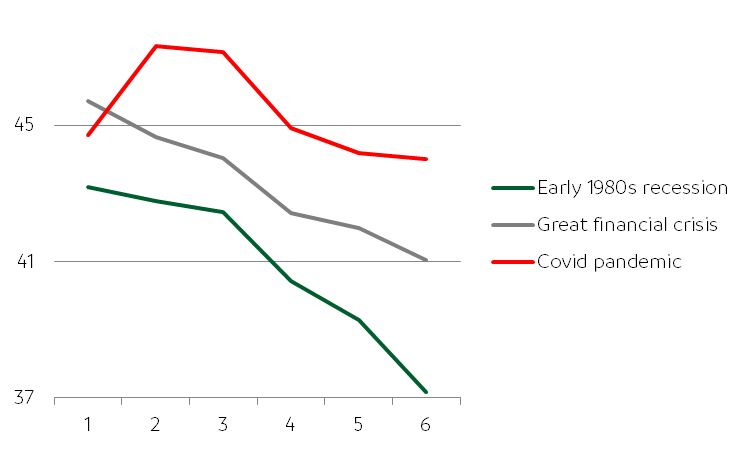 Hold on. For all the talk of difficult decisions, the reductions in government spending seem shallower by comparison. Despite the talk of savings in the autumn statement, the pace of winding down spending after the covid pandemic is radically slower compared to the early 1980s recession and the great financial crisis of 2008-2009.

Chart 3: cumulative reductions in total managed expenditure as a proportion of GDP between the first and sixth years following a peak year, selected crises (%) 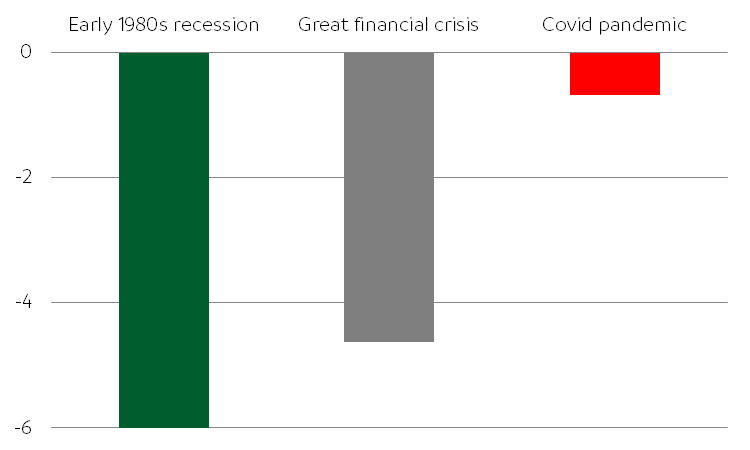 Of course they start at different levels, but even rebasing the three periods to 100 for comparability, the reductions are 14 per cent (after the 1980s recession), 10.2 per cent (great financial crisis) and 1.5 per cent (covid pandemic).

Chart 4: total managed expenditure as a share of GDP in the first to sixth years following a peak year, selected crises (year 1 = 100) 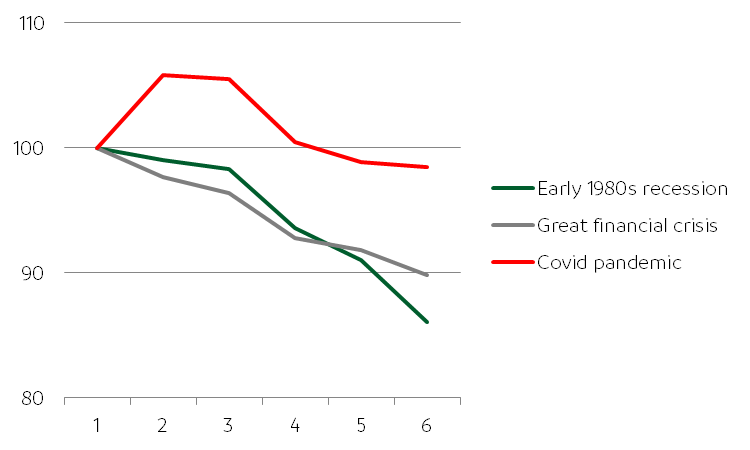 In other words, this is not the kind of post-crisis austerity we’re told it is. If covid was a seismic event for increasing the size of the state - which it clearly was - shouldn’t the comedown be a little more significant?

What this tells us, of course, is that this isn’t the austerity for the public sector we’ve become used to under post-crisis Conservative governments. It’s taxpayer austerity. Before the last general election, we estimated that the average forecast tax burden under a Jeremy Corbyn government would be 37.3 per cent. The OBR says that Jeremy Hunt's plans will be 37.4 per cent next year, then 37.5 per cent, 37.4 per cent, 37.3 per cent and then 37.1 percent. We reckoned the highest burden under Labour would be 37.9 per cent. It seems the ‘new normal’ after the covid pandemic means today’s Tory fiscal policies have more in common with old Labour than their contemporaneous Conservative governments.

Next time a politician pops up on TV to claim they’re a “low tax Tory” and invoke the memory of Margaret Thatcher or David Cameron, we can only hope the interviewer isn’t in the mood for playing games.