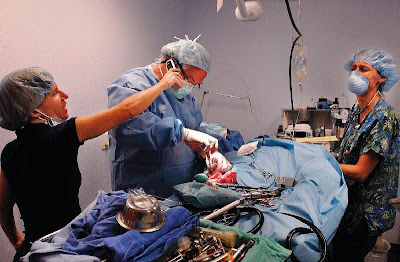 Thank you Mr McKinsey... and what do I cut next?

According to today's leaked McKinsey report, "NHS hospitals in England are rife with waste and inefficiency". Among other things, McKinsey found:

None of that will come as a surprise to BOM readers, who are fully seized of the NHS's manifold inefficiencies. But it seems the Department of Health needed some expensive management consultants to let them in on the secret.

The main purpose of the leaked report was to inform the Department of Health how it might achieve cumulative cost savings of £20bn by 2013-14, the cuts target laid down by David Nicholson, NHS Chief Exec. 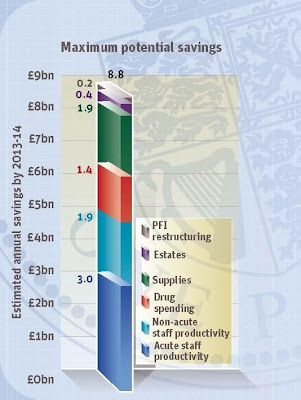 As we can see, by far the largest savings come from "productivity", the traditional weasel word for staff cuts. Staff gets slashed by 137,000, and as far as we can see, an extraordinary three-quarters of them come from the frontline - doctors, nurses, and healthcare assistants. They also recommend "decommissioning" various procedures with “limited clinical benefit” - such as tonsillectomies, varicose vein removal and some hysterectomies (so McKinseys are suddenly clinical experts?).

No wonder this morning's headlines are somewhat awkward. And no wonder ministers have reacted like scalded cats, "ministerial sources suggesting the review had been commissioned without full ministerial authority" and that its proposals "have already been rejected". Yeah, right.

The truth is that we face a major problem with the NHS. Despite the fact that no national politico will discuss it openly, we simply can't afford to go on as we are.

The NHS suffered a flash flood of extra funding during Labour's second term and much of the cash was squandered on ludicrous pay deals, bureaucracy, and whacky IT systems. So now, despite the fact that our health spending is approximately up to the European average, most of us (ie everyone who can't afford to pay twice) are still stuck with sub-par healthcare .


On BBC R4 Today this morning Niall Dickson, Chief Exec of the King's Fund, called for NHS reform. No surprise there - it's the consensus view among the political class.


The only problem is that we've tried reform before. About a dozen times. And each time, it either fails outright - after spawning another huge bureaucracy along the way - or it's reversed by flip-flopping politicos before it gets a chance to work (witness Labour's doctinaire abolition of GP fund-holding, and their subsequent back-tracking).


Moreover, this kind of reform invariably seems to increase costs rather than saving us money. As Steve Richards put it this week reform costs money:

"What is certain is that such drastic reforms would cost a lot of additional money in the short term and the government would still be heavily involved because it is responsible for raising the cash...


If the health market is opened up fully to private providers a hundred thousand new bureaucrats would rub their hands with glee. New companies would be established to advise the private bidders on how to get the best deal from normally gullible Whitehall negotiators. Armies of lawyers would be involved in the negotiation of contracts, seeking the deals with the most profitable treatments. Accountants would have a field day. In order to establish genuine choice for patients a surplus of decent places in hospitals and GP surgeries must be available. There is no point in having a theoretical choice only to discover that the decent hospital is full."


On that basis, we really are stuck: we want reform, but we can't have it because it's expensive and the money has now run out. So we'll just have to make do with our wasteful inefficient NHS until at some point over the distant blue horizon, our economy recovers enough to pay for the less wasteful more efficient health system we need.

Such is the despairing logic of the left.


The fundamental stumbling block so far has been that all of the reforms we have tried have taken as their starting point the continued existence of the NHS. Which means funding out of general taxation, with politicos holding the purse strings. And no matter how many convoluted quangos you place between ministers and frontline service providers, you can never escape that underlying reality. The system has to dance to the politicos' tune. Hopeless dysfunctional Stalinism is inevitable.


The real reform that would deliver better value for money is called putting the customer in charge. It involves breaking up the monolithic NHS, probably into a group of competing social insurers, just like they have in many european countries. It involves us paying our own healthcare premiums direct to insurers, and choosing between them on the basis of quality and price, just like we do with car insurance.


Yes, it does still require politicos to set the minimum healthcare package which must be offered by all insurers to all-comers, irrespective of age and previous medical history . And yes, it does require the state to pay the insurance premiums for the means-tested poor, so that nobody is without cover. But apart from that it brings the full power of the market to bear on waste and inefficiency.


It would cost more? Just like Richards says, the system would need to provide surplus capacity in order to allow choice to operate?


Well, there may be something in that, especially in the first few years. And nobody would start from here.


But since there is no more money, it can't cost more. Instead, we'd be saying to our competing insurers, "here's the problem, now you figure it out: you decide how you're going to deliver more bang for our bucks; if you get it right, you'll thrive, but if you get it wrong, you'll lose all your biz to a rival".


You see, the real question is who do we trust to tackle the waste and efficiency problem? Whitehall or the market?


The McKinsey report gives us a good insight into how Whitehall will do it - by cutting frontline staff, and canning treatments some management consultant deems to be of “limited clinical benefit”.


All of our real world experience says that the market is much better at delivering value for money than Whitehall can ever hope to be. Sure, we need to ensure there's real competition between providers, but in healthcare we can do that (which is why Richards is wrong to quote the Railtrack disaster as an argument against a market solution - Railtrack was a monopoly, which everyone agrees is a v bad idea).


If we are ever going to get value from all that additional dosh we've poured into healthcare, we really have no alternative. We must be brave enough to try the only reform that has a real chance of success. We must let the market work its magic.


Which leaves us with just one further minor problem: how do we get our politicos to summon up the courage for an honest grown-up debate?