There was much talk this weekend about an extra £2 billion of funding for the NHS. Healthcare certainly has become a major issue in the general election campaign – that means a bidding war is underway, with politicians from all parties pledging more money without really explaining where it will come from.

All too often politicians measure their performance on how much money they can spend rather than what taxpayers get in return.

And this weekend’s row is particularly unedifying, considering just a few weeks ago the Academy of Medical Royal Colleges highlighted potential savings of £2bn through better use of medicine, tests, operating theatres, and hospital beds.

The NHS appears to have been exempted from the efficiency savings the chancellor has demanded from Whitehall departments and local authorities.

And the annual row has over the imminent winter crisis has broken out, just as it did in 2013. We shouldn’t be in a position where people’s lives are at risk because of a change in the season, but things are improving: it recently emerged that last year saw the lowest ever number of winter deaths since records began in 1950.

Politicians should consider the following before committing more taxpayers’ money:

Historically speaking, the NHS has received large, real term budget increases for a couple of years in a row, and then had a few years of lower spending. This changed around the turn of the century when the NHS was handed big budget increases throughout the 2000s. Between 1979 and 1997, NHS spending increased in real terms by an average of 3.2 per cent per year. Between 1999 and 2008, this figure was 6.3 per cent per year. NHS spending has been pretty much frozen in real terms under the current government.

Despite the unprecedented budget increases, news outlets were inundated with stories about cash crises and impending financial disaster:

Where did the money go?

“Over the last ten years, there has been significant real growth in the resources going into the NHS, most of it funding higher staff pay and increases in headcount. The evidence shows that productivity in the same period has gone down, particularly in hospitals.”

General practitioners were perhaps the biggest beneficiaries of the funding boost:

The Chancellor has unable to control NHS pay effectively. Staff have still been moving up the “Agenda for Change” pay scales meaning that on average, NHS staff pay in England has increased by 9.4 per cent in cash terms since 2009.

Pay rises have been particularly benefited managers, locum doctors and those working in administrative roles. 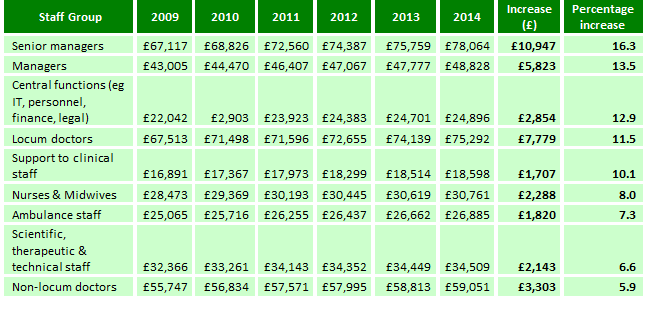 The prioritisation of pay and headcount meant little was invested in medical technologies. Look at the increase in the number of MRI units per million of population between 2000 and 2011 in some countries similar to the UK.

Now we have fewer MRI scanners per head of population than Slovenia, Estonia, Slovakia and the Czech Republic. Greece has four times as many.

We have fewer CT scanners per head of population than every country in the OECD apart from Hungary and Mexico. Chile and Poland have more and Estonia has twice as many.

Something for the Chancellor to bear in mind

George Osborne, Ed Balls and others should heed the advice of Dame Julie Moore, the Chief Executive if the Queen Elizabeth Hospital in Birmingham:

“The NHS at its best is amongst the best in the world. However, it is patchy,” she says. “Putting more money in has sometimes actually led to some of the problems, in that you’ve artificially propped up some of the hospitals that really are not sustainable.”