by Harry Fone, grassroots campaign manager at the TaxPayers' Alliance

High Speed 2 is looking for a new chairman. Consequently, would you believe, I’ve thrown my hat into the ring!

Let’s get something out the way: I have no hope of getting the job. Everyone can see that. But that’s worth dwelling on. How exactly can we just tell I haven’t got a snowball’s chance in hell? Perhaps the ludicrousness of the proposition says more about the process than it does about me. I want not just to remind everyone how poorly the project is going - but do this to expose the ‘closed shop’ nature of public sector appointments.

Recruitment for roles like this would usually produce predictable results. Through our clean up the state campaign, the TaxPayers’ Alliance (TPA) has shown this. The balance of appointments tends to be skewed in the favour of those with similar political leanings. They even come from the same areas of the country. They share an outlook. I’d wager most quango bosses think throwing vast chunks of taxpayers’ cash at a problem is the solution.

So it has proved with the now-former chairman Allan Cook. Before his resignation the cost of the much-hated rail project soared from £56 billion to £100 billion. The benefit-cost ratio has subsequently nose-dived and freedom of information requests by the TPA revealed millions of pounds wasted on private cars, furniture and board fees. What makes this all the more ridiculous is the remuneration Mr Cook received as non-executive chairman of HS2. For just three days of work per week, he received £266,770 in 2019-20.

There were suggestions before the local elections last week that Andy Street, the Conservative mayor for the West Midlands, was being sounded out for the role if voted out of office. Were he to become chairman of HS2, Mr Street would just be a continuation of the status quo. Another HS2 supporter seemingly unconcerned that the project had quadrupled in price since its inception.

In all likelihood, the next chairman of HS2 won’t differ greatly from Allan Cook - it will be business as usual. The current system of appointments clearly isn’t working. It is a sad thought that someone willing to challenge the status quo would never stand a chance of getting through the door. As a report by TPA research director Duncan Simpson laid out last year:

“[The appointments system] imbues a sense of groupthink, whereby the usual corporate governance functions seen in the business world cannot be applied as effectively, while promoting ideas and practices that are unacceptable outside of the quangocracy. It can also allow for complacency, with an assumption that relying on existing relationships is sufficient to gain a role, and is difficult for anyone outside of the system to effectively challenge.”

In fairness to the current government, they have acknowledged that the current state of affairs isn’t working. But ultimately, we need a complete break from the public sector appointments system and introduce one that results in a good deal for the hard-pressed taxpayers who fund this myriad of roles.

How do we do this? The TaxPayers’ Alliance has taken inspiration from the UK’s new immigration policy and has urged the government to adopt a points-based appointments system. Using the positive and negative criteria in the example table below, candidates would be assigned a score. Different weightings could be applied to each benchmark, but in essence: the higher the score, the better the applicant’s chance of getting the role. 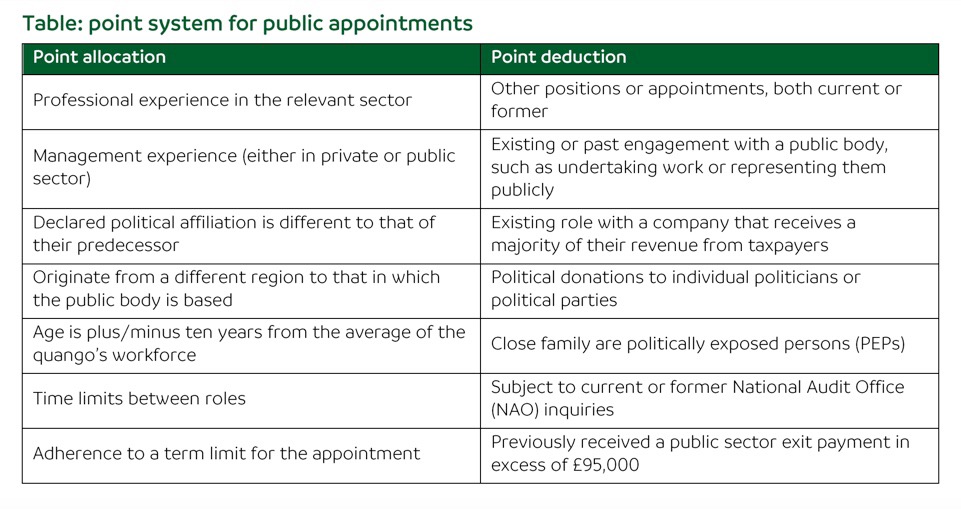 This innovative system would bring about an end to what might be referred to as the “old boys network”. The seemingly closed shop would be opened up to many people who would not previously have considered putting themselves forward. This is especially important when you consider that quangos cost the taxpayer over £200 billion in 2019.

The magic circle appointments process, despite the mess that HS2 is clearly in, should serve as a warning to the government that things can’t go on as they are. Public sector appointments need an urgent overhaul. We need people with the dynamism and skills to get maximum value for taxpayers’ cash before it’s too late. In the meantime, help me send that message.