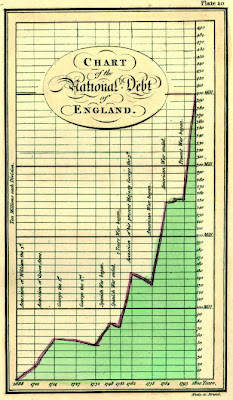 It used to be so much easier to keep track

Yesterday the Office for National Statistics published a very interesting paper on public debt. For the first time in an official publication, it brings together estimates of all those off-balance sheet Enron items we've blogged so often - public sector pensions, PFI, state pensions, bank bail-outs, nuclear decommissioning - the lot.

And it gives a pretty evenly balanced commentary on the kind of liabilities involved, and some of the estimating problems. Yes, much of this material has been published in dense technical form before, but this paper is much more accessible and mercifully much shorter (a mere 26 pages).

The paper opens with a statement it's worth quoting in full because we might almost have written ourselves:

"Just as for companies and households, the public sector’s balance sheet is central to assessing its financial health. Such a balance sheet would set out the public sector’s assets – what it owns or is owed – and its liabilities to others. A limitation of traditional balance sheets is that the liabilities they include are defined quite narrowly and so exclude a range of potential obligations to others. To ensure that fiscal policy setting expenditure, taxes and government borrowing – is as well based as possible, and in the interests of transparency, the publicly available information on the range of public sector assets and liabilities needs to be as complete as possible."

To which we can only say, hear, hear.

The bottom line is that the ONS is now actively considering whether to include a whole raft of those Enron items in the official measure of public debt. And here's their summary of how that might look (you'll have to click on image to read):

So what does that lot add up to? The Mail's Steve Doughty has done the sums and makes it around £4 trillion - that is, well over four times the current official £0.9 trillion National Debt (Public Sector Net Debt - PSND). The largest additional items - all of which we've blogged many times - are:

Now, the ONS has not committeed itself to adding all of these to the monthly figures for Public Sector Net Debt, but it does sound as if it intends to publish regular updates of wider public sector liabilities. Which we wholeheartedly support.

Of course, in estimating these wider liabilities, we will expect the ONS to maintain its own high standards of integrity and impartiality.

For example, the official figures it quotes for unfunded state pension liabilities are almost certainly a serious under-estimate. Whereas they quote £1.2-1.4 trillion, external analysts calculate a figure at least twice that (eg see this excellent IEA paper by Nick Silver, which conservatively puts it at £2.75 trillion, and this blog for how, in terms of the ongoing liability, it isn't difficult to come up with numbers that are a multiple of even that).

Also we're not convinced by the ONS practice of netting off liquid assets in its main published figure for public debt (PSND). What taxpayers need to know is the size of our gross liabilities. Sure, there may be some assets to set against those liabilities, but those assets can never be entirely secure even if they are supposedly liquid. For example, the deposits our local authorities placed with the Icelandic banks were netted off as liquid assets, but as we later found out, they were most assuredly not secure. And the same goes for the liquid assets of RBS and Lloyds, which ONS are proposing to net off against their liabilities. Doing so will reduce the net debt figure by about £1 trillion, even though taxpayers are actually on the hook for the entire gross debt.

Still, overall, this is another step in the right direction. It is absurd for the nation to depend on external analysts and bloggers with fag packets to calculate the real National Debt, when we employ an army of statisticians who could do the work so much more thoroughly.

The ONS must get cracking and publish the results openly and fearlessly. It's time for us to know the complete and unexpurgated truth about our finances.