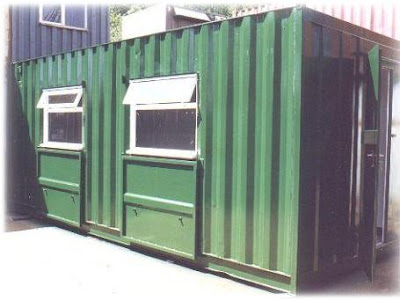 Down at the site office waiting for Darling's blank cheque

We've blogged PFI many times (start here and see all previous posts gathered here). In theory, it could be a good deal for taxpayers, because instead of trying to build and maintain hospitals and schools itself, the government gets private sector specialists to compete for the job. Not only should the price be lower, but the risks of things like project overspend are transferred to specialist operators who are better equipped to manage them. Everybody should win by eliminating waste and inefficiency.

In the real world, things have turned out rather differently. Because Mr Brown has used PFI primarily as a means of borrowing off-balance sheet, local authorities and NHS trusts have been under immense pressure to fund their capital projects via PFI. As a result, some pretty shocking deals have been done (see many previous blogs eg here). The taxpayer has still ended up carrying the debt, but overpaying substantially relative to traditional gilts funded projects.

Now the financial meltdown has pitched this entire PFI charade into the flames.

The pricey bank finance on which PFI depends has dried up, and projects worth billions have stalled. These include the £5bn project to widen the M25, the £1.2bn project to rebuild or refurbish Birmingham's secondary schools, and some unknown hundreds of millions to build the 2012 athletes' village.

This is especially unfortunate since Brown and Darling have promised to accelerate public investment programmes to mitigate the economic downturn. So action is imminent:

"A multibillion-pound rescue of building programmes involving schools, hospitals and motorways that are threatened by a lack of private finance is to be announced by the Treasury within days, The Times has learnt. The Chancellor is expected to guarantee bridging finance to enable public sector schemes being built under the Private Finance Initiative (PFI) to go ahead if they are already in the pipeline."

Now, given our economic predicament, even small government supporters can see the attraction of cracking on with planned public investment programmes. But taxpayers should be very concerned about this PFI rescue.

Because given everything we know, having a panicky Mr Darling rush into the PFI site office with yet another book of blank cheques means only one thing - we are going to get skinned.

The blunt truth is that the Simple Shopper is incapable of cutting us a good deal, even when he's holding all the cards. We can see that right now with the unfolding crisis on the 2012 Olympics project: costs are still spiralling out of control despite the fact that construction contractors are facing their biggest downturn in living memory. The Shopper is under strict orders to get the work done whatever the cost, and the contractors know it.

So here's yet another item for George Osborne's list when he likely takes the controls next year. He must order a full drains-up on PFI, looking to cut back drastically. Enron balance sheet fiddles are out. Worst-of-both-worlds compromises between public services and private suppliers must go.

PS Talking of public sector buyers being schmoozed and seduced by raw meat-eaters from the private sector, what are we to make of our freeloading mandarins? The winner of this year's Corporate Boonie Award is Sir Brian Bender, now Permanent Secretary at BERR, but previously head of Defra and the man who presided over the Rural Payments Agency fiasco (the Commons Environment, Food and Rural Affairs Committee pronounced itself "astonished" he hadn't been dismissed then - see this blog). Bender accepted corporate hospitality on 52 separate occasions during 2007 - once a week. Does that pass the smell test? Sure, you can argue - as Matthew Parris did this morning - that being treated to breakfast by GKN is hardly a boonie. But what about being taken to Wimbledon - with your partner? Or the Chelsea Flower Show, various exhibitions, concerts and dinners, again all with your partner? The truth is it stinks. Which is why some private sector firms, and in fairness, some public sector bodies, ban the acceptance of such stuff altogether. Something else George Osborne must look at. Many feel we should impose a blanket ban right across the public sector - any hospitality beyond the occasional in-house working lunch and unaccompanied must-attend very boring industry dinners should be a sacking offence.
This website uses cookies to ensure you get the best experience.  More info. Okay