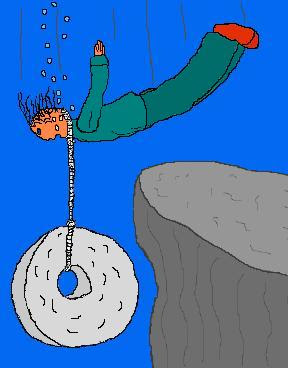 Regular readers may recall an extraordinary exchange at a Public Accounts meeting in November 2007. The PAC were grilling Treasury mandarins on the PFI millstone, and they wanted to know how big the debt had become.

Now, you might have thought that would be simple to answer. After all, PFI involves some pretty chunky liabilities, so the mandarins would surely have the figures at their fingertips.

Er, no. The mandarins floundered around all over the place. Finally, one PAC member - the redoubtable Richard Bacon - got so frustrated, he whipped out his own pocket calculator and literally added up the numbers for himself.

You see, the projected annual contractual payments under outstanding PFI deals are published on the HM Treasury website (see here - the "Signed Projects List"). What HMT doesn't publish is their total compounded value, and that's the figure we really need to know. Otherwise, we cannot understand how big the PFI liability has become in the context of the government's overall debt.

So let's re-run Bacon's calculation and see how big that future liability now is. 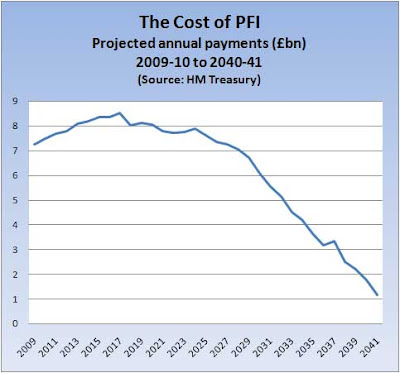 As we can see, annual payments are projected to peak at £8-9bn pa in the middle of the next decade (ie the decade when we won't have any money). And they then remain above £7bn pa all the way until 2028.


The first calculation we can do is to add up all the annual payments to give the grand total over the whole of the projection period. That comes to £206.6bn.


Which in itself is quite worrying, since when Mr Bacon did his calculation, the total was "only" £157.9bn. So in just 18 months, the total has increased by £50bn, or around one-third.


But of course, simply adding the numbers doesn't give us a figure we can properly compare to the rest of the government's debt mountain. For that we need to discount the future PFI payments by an appropriate interest rate. And in this case, the appropriate rate is the yield on government debt (ie gilts) which currently stands at about 4.5% pa.


So we estimate that our PFI debt currently stands at £124bn, up from £100bn the last time we crunched the numbers.


In which case, how come there's so much confusion about the right figure? As Mr B put it:


"I have been trying for several years to get to the bottom of how big is PFI, and it seems to be quite difficult to get an accurate answer. I have been told by various people, including by the National Audit Office, answers such as, “Well, really they do not know.”


The truth is that the mandarins don't like debt calculations like ours. They prefer to quote a much smaller number that comprises the so-called "capital value" of the PFI projects. And that currently stands at £63.8bn, only about half our number.


In essence, it's because the mandarins' number only measures the capital cost of building the PFI school or hospital (although, to be frank, it isn't entirely clear that it even measures that). Our number, on the other hand, includes not just the capital cost, but also the future cost of various services that come as part of the PFI contract - everything from maintaining a hospital to running a prison. Our number also includes the funding costs of the PFI contractor.


So our number measures the whole shebang, whereas the mandarins prefer to focus on just one element of the total PFI cost. Which - surprise surpise - is much smaller.


In fairness, they do wheel out an argument to support this apparent trickery. They say that the element of future PFI payments that represent service charges (such as cleaning and maintenance), is nothing to do with borrowing to fund a capital asset. And just as we don't count the future salaries of government employees in our measure of government debt, we shouldn't include the future payments for these PFI services.


You see, the big difference is that future payments for PFI services are a clear contractual liability, whereas future salary payments to government employees are not.


Government employees can always be made redundant (watch this space), but PFI contracts cannot be broken unless the government can prove (probably in court) that the contractor has failed to provide the agreed service. Which means we are skewered firmly on the hook.


And fundamentally, that's also why the Office for National Statistics' tortuous distinction between different types of PFI contracts is also bogus.


The bottom line is that PFI represents a substantial contractual liability for taxpayers. One that has now soared well over £100bn.


Of course, there are those who think PFI debt is now pretty small potatoes compared to the gzillions of debt being run up everywhere else. But as always, a hundred billion here, a hundred billion there, and pretty soon you're talking real money... either that, or national bankruptcy.