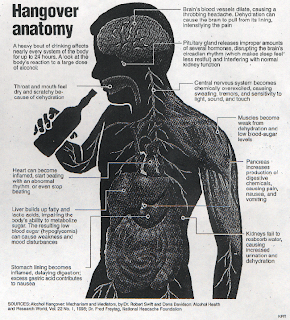 Christmas and New Year over, it's time to tackle that fiscal hangover.

If the Conservatives win the election, George Osborne's first make-or-break budget is now less than 6 months away. And it's time we had a much clearer explanation of precisely how he is proposing to deliver the spending cuts the markets are expecting.

To put it another way, if Mr Osborne fails to cut public spending, he will need to increase taxes by £100-£150bn pa. Which would require, say, increasing VAT to 30% and doubling the standard rate of income tax to 40p (see here).

So what to cut?

As we blogged many times last year, one of the prime targets has to be the public sector paybill.

When last sighted (2008-09), that was running at £160bn pa in cash terms - 11% of GDP. This year, we estimate that percentage has risen to nearly 12%, reflecting the decline in GDP and the fact that public sector employment has increased again. And this is a burden that has got a lot heavier through the years of Mr Brown's reckless spending splurge, with record numbers of new public sector jobs and higher pay all round : 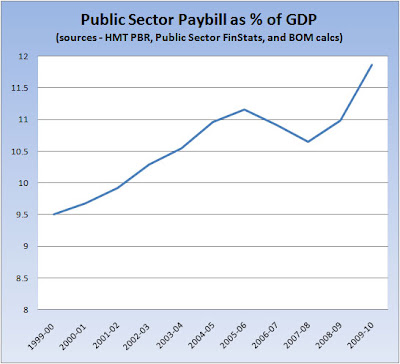 So in just a decade, the public paybill burden has increased by a whopping 2 percentage points of GDP - around £30bn pa. And note that this definition of pay excludes the net accrual of future public sector pension benefits. They currently add a further £40bn pa or so (see here - Table D.1). So the true overall public sector paybill is more like 15% of GDP*.

But at least the problem is now getting some serious airtime. Mr Osborne has promised to freeze pay for public sector employees earning more than £18k pa, the LibDems promise a total freeze, and even Labour will impose a freeze on the top 40,000 (see here for the TPA's summary of main parties' cuts proposals). None of that is enough, but it's a start.

And the press are also focusing on the issue. Yesterday's Sunday Times reported its own investigation (see here):


"Public sector workers earn 7% more on average than their peers in the private sector — a pay gulf that has more than doubled since the recession began.


Official figures show that staff employed by the state are enjoying bigger pay rises, working fewer hours and receiving pensions worth up to three times as much as those in the private sector.


Civil servants, National Health Service staff, council officials and other public sector workers have enjoyed a “golden age” under Labour, according to an investigation by The Sunday Times." 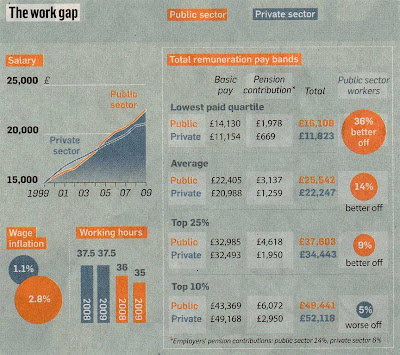 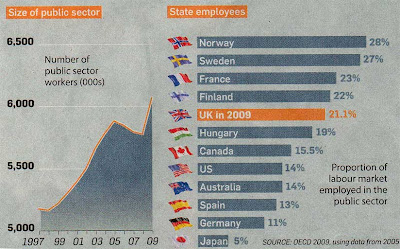 So what's to be done?

In the IOD/TPA cuts paper published last September, we recommended a two year pay freeze for all public employees (except service personnel in conflict zones), a 5% pay cut for the richest 10%, and increases in employee pension contributions and various other employment benefit reductions. Over two years we estimated that would build up to a £16bn pa total saving, or around 10% of the cash paybill.

Nobody says it will be easy, and Mr Cameron will need to face down the strong public sector unions. But make no mistake - this is the scale of saving we will need.

Ted Bromund at the Heritage Foundation draws our attention to an identical struggle now taking place across the US.

There too, heavily unionised public employees have been been "coddled and spoiled" (as the Economist puts it), doing much better than most private sector workers, and imposing a cost burden taxpayers can no longer afford. The average pay of a Federal worker is $71,000 pa, compared to $50,000 in the private sector. On top of that, the public sector still offers medical insurance, and the kind of pension entitlements most private sector employees can only dream about (see here). What's more, public sector employment has been pretty constant through the recession, whereas the private sector has shed 6% of its workforce (see here).

So what are US politicos doing about the problem?

Yes, that's right - they're doing everything they can to avoid taking on the unions. Which means that instead of fundamental reform (eg scrapping their expensive defined benefit pension schemes), they're resorting to stop-gap measures such as recruitment freezes and asking employees to take unpaid leave. In other words they're passing the pain on to their customers via reduced service levels.

But in the US, states and municipalities can literally go bust, which means that local fiscal problems get a lot more fraught than we're used to here. At least one city has gone bust precisely because it failed to grip its paybill (the Californian city of Vallejo - see here). And because of that, there are now some signs of minds being concentrated and political resolve beginning to stir, with New York leading the way on pension reform.

So as we wait for Mr Osborne to show us that axe he's reputed to have, we'd do well to watch the US. The public sector paybill will have to be pruned drastically, and the sooner we all recognise that reality, the easier it will be to manage the public sector unions next winter.

*Footnote: the accrual of future pension benefits does not cost the government anything in current cash terms - the government simply accrues a liability to pay those benefits in the future. In effect, the government is funding part of its paybill by borrowing from its employees. But that doesn't mean the taxpayer burden is any less - it simply means we have even more debt.
This website uses cookies to ensure you get the best experience.  More info. Okay