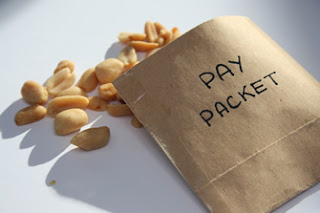 Don't you believe it

Whoever wins the election will have to tackle the pressing issue of public sector pay. At a time of grave fiscal crisis, with taxes rising and private sector pay under the cosh, the current arrangements are simply not sustainable.

Discussions in this area tend to generate more heat than light, so we thought it would be useful to set out some facts on who gets paid what.

Let's start with an old favourite - GPs. As regular BOM readers will recall, the Department of Health's crazy new contract stuffed GPs mouths with so much gold they nearly choked (eg see this blog, and this). And as it happens, a BOM correspondent has recently sent us a confidential document showing just what GPs are now earning, five years on.

It turns out that in the most recent year, the average GP practice earned each of its partners £135,000 pa.

Now, you may say they're worth every penny. And you may be right. But there's no denying it's quite a lot of money, especially when you put it in its market context.

HMRC also publish data on the distribution of total taxable incomes (ie including pay, pensions, and investment incomes), and their latest release shows that in 2007-08 only 5% of the population had pre-tax incomes above £61,500. And only 1% had incomes above £149,000.

So we can see that relative to the rest of the population, most GPs are now extraordinarily well paid.

And what about other less highly-wedged public employees? Where do they stand in the pay rankings?

We've taken a look through the ONS data and come up with the following overview, covering all the usual "frontline" headline grabbers like teachers, nurses, firemen, and policemen (full-timers only, and note that Medical Practitioners includes not just GPs, but also somewhat less well paid groups like junior hospital doctors):

As we can see, all these groups on average earn more than the median full-time earnings across the economy as a whole. And senior staff groups are comfortably within the top 10% of earners.

So what does that tell us?

Fundamentally, it says that a squeeze on public sector pay will not trigger a huge recruitment and retention problem. Not only are jobs outside going to be hard to find, but public sector pay levels currently look generous against the wider economy (and that's without even considering those famous gold-plated indexed public pensions - widely reckoned to be worth another 25% on top of salary).

It also tells us we should be strong. Teachers 'n' nurses are always wheeled out to headline the resistance to pay restraint, but overall, they're not doing too badly.

And what about those public employees down at the Palace of Westmnister? We've recently been treated to a whole bunch of "retiring" members telling us how MPs need a whacking great pay rise to compensate for the new limits on troughing rights. Well, MPs pay is just about to rise to £65,737, plus a continuing range of allowable expenses. The pay sounds about right - in line with the median pay for senior civil servants (see chart). But as we've blogged before, the accommodation allowance should go. We should provide state-owned flats, such as those that will be left over after the Olympics - handily located just a few stops from Westminster on the Jubilee line.
This website uses cookies to ensure you get the best experience.  More info. Okay