Following weeks of dry weather across the country, many water companies have issued hosepipe bans and encouraged consumers to conserve supplies. A lot of media attention has been focused on the amount of water lost to leaks by water providers. As Robert Colvile rightly wrote recently, “The reason that just over 20% of Britain’s water is lost to leaks is because that is the level set by the regulator.” There’s not necessarily an obvious incentive for providers to improve upon this. But many pundits (particularly The Guardian newspaper) have laid the blame on the fact that water companies are privatised. Their answer is renationalisation. But is public ownership of the water industry a viable solution?

In England and Wales there are 25 water companies that are privately owned. Compare this to Scotland, where Scottish Water is wholly under public ownership. So who has performed best when it comes to leakage? 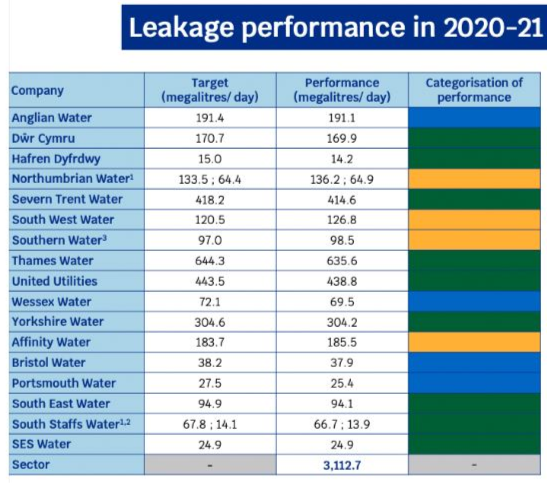 Only Thames Water lost more water to leakages at 635.6 ML per day. But this doesn’t tell the full story as the industry regulator Ofwat deemed this performance as “Average” in their Service delivery report from November 2021. How can that be? Well you have to consider the proportion of water leaked compared to total supply.

Rather annoyingly this data isn’t easily available - even the regulator couldn’t supply me with information on leakage as a percentage of water put into supply. But using all the available data from the latest set of water companies’ annual reports from 2021-22, we’ve managed to create a better picture of how they shape up. 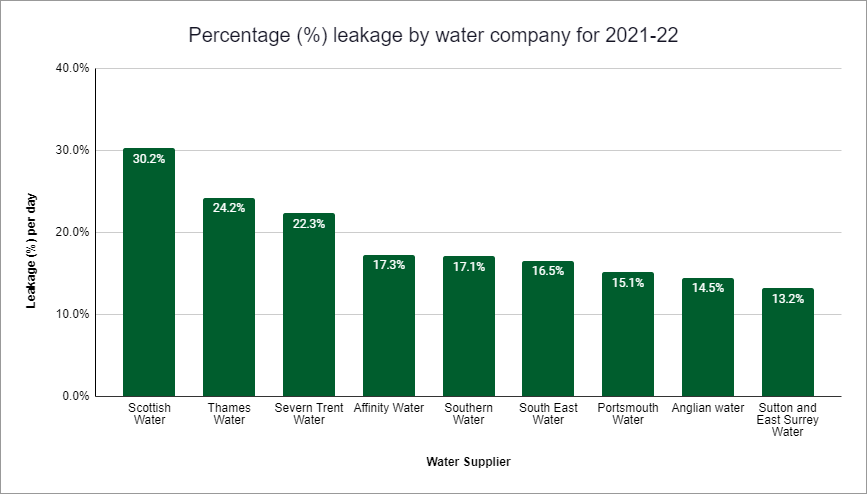 As you can see, Scottish Water is losing 30.2 per cent of its total water supply compared to Thames Water at 24.22 per cent. Indeed most companies (of the ones we were able to source data for) in England operate leakage loss of less than 20 per cent. It’s also worth noting that Northern Ireland Water is publicly owned and performing worse than its English counterparts.

In simple terms - based on this limited data - nationalised companies seem to be performing worse than their privatised counterparts in terms of leakage.

Now it’s not all bad news for the publicly-owned companies. A recent report from Water UK states: “Scotland has reduced its level of leakage by 60% from 2005 to 2020” and “It appears Scottish Water has outperformed England and Wales based on this measure.”

But the report continues:

“However, leakage, when normalized by property and km of main, started from a much higher level than in England and Wales. Additionally, Scottish Water’s program of leakage reduction did not start until 2005, and this program was able to take advantage of the best practices, skilled resources and mature supply chain that had been built up since 1995 tackling leakage in England and Wales.” 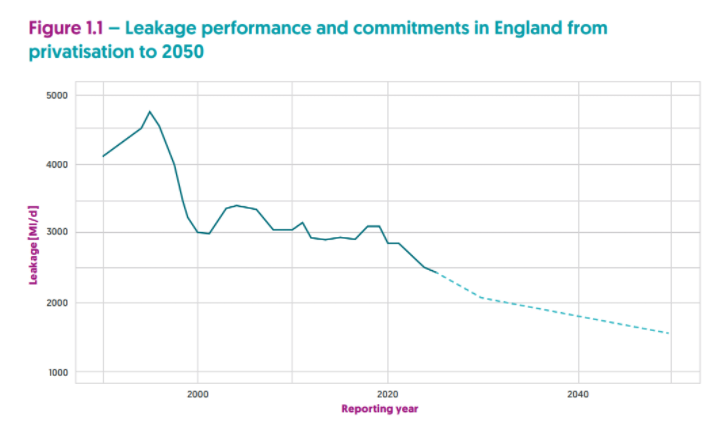 So Scotland is catching up by adopting the practices implemented by privatised water companies, who are not easing up on their efforts either. The same report forecasts that leakage in England will reduce by around 50 per cent from current levels by 2050 as the grave above shows.

Renationalisation is not the silver bullet it is promised to be. The industry as a whole may need to do better on the issue of leakage, but that’s an issue for the regulator - let’s not pretend that putting government bureaucrats in charge would make it any better.

And there are further issues with renationalisation too. The Guardian newspaper and others are quick to take aim at pay packages for private sector bosses in the water industry. Fair enough - but does that mean renationalisation would see the end of bumper remuneration? Not likely. The chief executive of Scottish Water is paid around £265,000. Reports suggest the top three bosses at the nationalised firm also shared £227,000 in bonuses, with the chief exec handed a £92,000 bonus, while chief operating officer Peter Farrer was paid £68,000 and finance director Alan Scott received £67,000. All at taxpayers’ expense.

So the answer isn’t renationalisation, but to do privatisation properly. While we have water privatisation in England and Wales, the problem of natural monopolies still remains. As our Restate the Case notes from 2019 explain:

“Government declared in 2015 that it wanted to bring more competition to the water market, and so introduced competition for commercial properties in 2017, but since then liberalisation for households has stalled. This is despite an Ofwat analysis in 2016 showing that in most scenarios both consumers and the water industry would see a net benefit from more competition.”

We shouldn’t rest on laurels. Yes it’s great news that leakage is being reduced significantly, but the best markets have the most competition. The next government should look again at introducing competition to the water industry for households, as they have done for businesses.

Greater competition in markets will almost always result in better service and a reduction in prices. And, despite what the pundits claim, it will always produce better results than renationalisation.