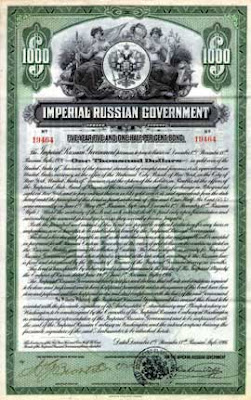 These days you don't even get a nice certificate to keep

A question we've been hearing a lot over the last few days is how on earth is the government ever going to repay all this debt it's taking on?

The short answer is that it's not going to.

On today's definitions, we've got statistics going back to 1974-75. And this is how they look, including the latest frightening Budget projections up to 2013-14: 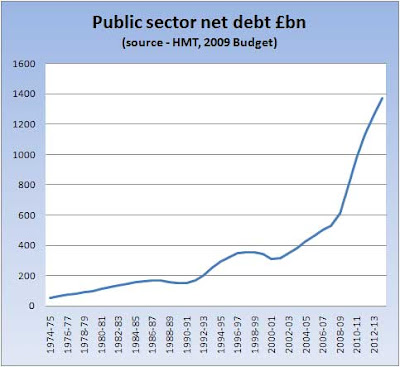 As we can see, it's basically four decades of increase.


But both of those periods saw exceptionally strong economic growth combined with falling interest rates. Moreover, in the overall scheme of things, neither actually made much of a dent in what we owed.


So HMG's record of debt repayment in the recent past is pretty weak.


But to get a fix on today's problem we really need to look further back - to the period after WW2 when we were struggling with the massive debts we'd accumulated in two world wars.


For this period we have to use the traditional definition of the National Debt, which comprised the liabilities of the National Loans Fund (for further detail read this). Here's how it looks for the three decades from 1945 to 1974: 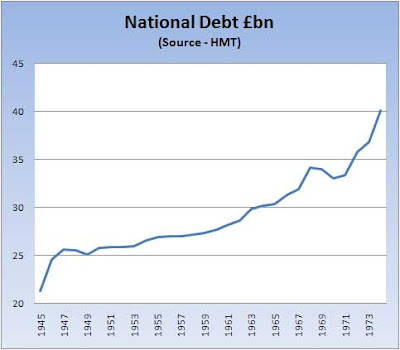 So although we reduced our debt burden from 250% of income to 50%, we actually made no net repayment at all. In fact, we doubled our outstanding debt.

Over those three decades, money GDP increased nearly sevenfold, so as a percentage of GDP, debt fell sharply.

But here's the scary bit - of that sevenfold increase in money GDP, the vast bulk comprised inflation. In fact, over the period as a whole, inflation eroded the real value of government debt by nearly three-quarters.

Or as HMG's creditors might say, by debasing the currency, the government defaulted on three-quarters of what it owed.

Today's gilt investors are well aware of this history, and will not want to make the same mistake again. Which is why at the first sniff of inflation lifting off, they are likely to demand much higher higher yields (interest rates) on government debt to protect thmselves.
Taxpayers should be very concerned. The combination of high debt and high gilt yields could impose a debt servicing burden even greater than the burden we faced following WW2.
PS For a longer perspective, here's the Tresury's long series for the National Debt (old definition) as a percentage of GDP (1858 - 2004): 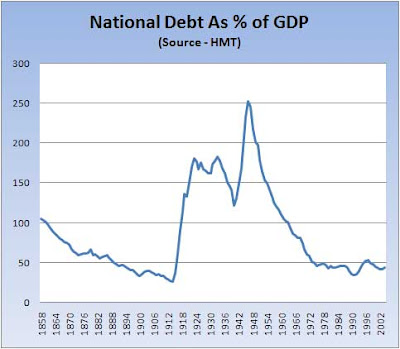 As we've said before, the two World Wars imposed a huge debt burden on the public finances. It was one reason why the UK economy struggled relative to our competitors right up to the 1980s.