The world's biggest and most influential bond manager, PIMCO, has just passed a further and even more worrying judgement on our precarious financial position (see this blog for previous warning). Bill Gross, PIMCO's top man, offers the following advice to investors:


"The UK is a must to avoid. Its Gilts are resting on a bed of nitroglycerine. High debt with the potential to devalue its currency present high risks for bond investors. In addition, its interest rates are already artificially influenced by accounting standards that at one point last year produced long-term real interest rates of 1/2 % and lower."

He describes us as sitting in “The Ring of Fire”:

And here's his chart: 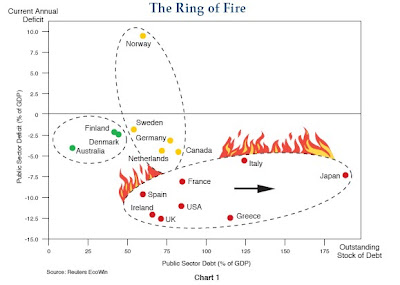 Now OK, we're not the only ones in The Ring. But we are the ones whose debt position is deteriorating most rapidly, simply because we have the highest annual borrowing. And some of our Ring companions, like Greece, are already starting to smoulder alarmingly.

The thing is, Mr Gross is not saying this because he has a political axe to grind. He's not saying it because he opposes Labour's big government state. No, he's saying it because this is what PIMCO's investment analysis shows. True, he's almost certainly sold his own gilts already, so to that extent his statement can be seen as self-serving. And his chart is obviously dressed to impress. But if you think he's blagging, just read his newsletter.

So what does HMG have to say?


"That company has made rather similar comments in the past. It is entirely untrue. We have continued to see a good level of demand for gilts. I only point to the fact that our auctions have been well covered and I am confident that we will continue to meet our needs."

But the head of the government's Debt Management Office - the people responsible for actually selling the £200bn+ of gilts HMG will need to issue every year for the forseeable future - doesn't sound quite so sure. He tells the FT he's worried about the end of Quantitative Easing, the Bank of England's programme to fund the fiscal deficit by printing money:


“We are in a transitional phase in as much as nobody in the market knows what the next step of the Bank of England will be. That transitional phase is always going to be a pivotal moment for the market. We are moving from one state to another and that could increase the short-term uncertainty un-til it is clear what the MPC has decided on as their next course of action. It could mean we move into a different pricing environment.”

A different pricing environment: that's certainly one way to describe a Ring of Fire.

Let's hope Mssrs Cameron and Osborne are taking this in. Because although nobody expects the current fag-end administration to do anything meaningful about our borrowing, the markets won't be so forgiving with the new team. They will be looking for action, not talk.