To find out more about the Stand Against Socialism (SAS) campaign, click here

Over the years socialist countries have produced some truly abysmal products. When workers are stripped of economic incentives market signals are severely distorted. This blog highlights some of the worst goods and services ever produced by socialism.

Go into any British supermarket and you’ll be confronted by a staggering amount of choice when it comes to food. There is something to suit all budgets and tastes. Contrast this to the Soviet Union, more specifically Ukraine, where collectivisation of food production was an instrumental factor in the death of nearly 4 million people. Furthermore when food was available there was only the state branded option, often in plain packaging and variety was a rare thing. Rationing in socialist countries is common (most recently in Venezuela) and people have to queue for hours just to buy basics such as bread, eggs and milk. It is not uncommon that shelves in supermarkets are completely empty. Quality of meat was often poor, with the first in line to receive the best cuts and everyone else had to make do with lower meat content skin and bones.

It’s bad enough not being able to find much to eat in a socialist country but imagine not even being able to enjoy a beer at the end of a long day. Well that’s exactly what happened in Venezuela, where they ran out of beer after the largest brewery, Cervecería Polar, could not acquire the ingredients to brew beer. Something to think about the next time you walk down the booze aisle at the supermarket that is festooned with almost endless choice and variety of alcoholic beverages.

As this illuminating video shows, Soviet era housing was a far cry from the standards we are used to in the West. People were often forced by the state to share small flats with people they hadn’t even met. All urban housing was state-controlled and there wasn’t enough for people to have their own homes. Tenants had little privacy in cramped facilities, often sharing one communal toilet. Residents were allocated 30 minutes per day to use the bathroom whilst their neighbours queued outside waiting to empty their grandchildren’s chamber pots. Whilst it’s fair to say we have a housing crisis in Britain, it is nothing compared to what many comrades had to endure in the USSR.

We Brits love our cars. After all we own nearly 40 million of them in total. Buying a car in this country is incredibly straightforward and with more choice than ever before. This was not the case back in the Soviet era, when everything from Trabants to Ladas inched off the production lines. Buyers would have to wait years for a new car. Once they did get their “cherished” motor, the build quality was often of woeful quality and poor design, as this video about the Yugo neatly explains. In fact, it was such a bad car that it was recalled in America because it produced too much pollution!

While the British and French were busy crafting Concorde the Soviet Union had their own plans for a supersonic passenger aircraft. On New Year’s Eve 1968 the Tupolev Tu-144 (more commonly known as “Konkordski”) made its maiden flight. Writing about the aircraft, author Howard Moon described early flights as “extremely unreliable”. During 102 flights and 181 hours of freight and passend flight time, the Tu-144S “suffered more than 226 failures, 80 of them in flight.”

One of the aircraft’s darkest days came on June 3rd 1973, when the first production model of the Tu-144S suffered a horrific crash, killing all 6 people on board and a further 8 on the ground. The plane did run passenger services across the Soviet Union, but passengers reported very high noise inside the cabin, meaning it was easier to communicate via hand-written notes rather than talking. Compare this to Concorde, where passengers drank Champagne and enjoyed fine dining in relative silence. 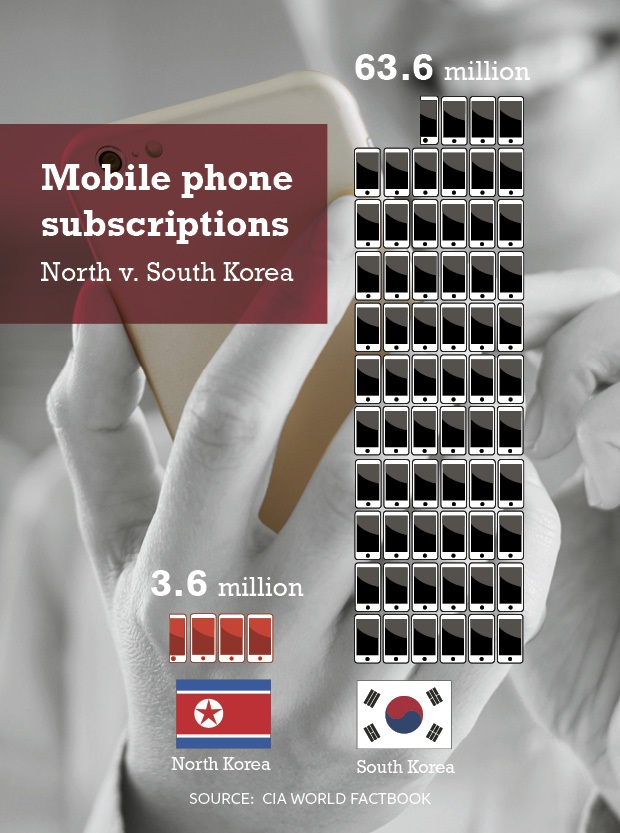 Even obtaining a relatively simple communications device such as a landline telephone was difficult. For example, in Soviet controlled Poland, “one could wait as long as 20 years” for a line to allocated and installed. The state had little incentive to install phones as it meant they had less control over the populace. A lack of communication reduced the risk of dissent and uprisings. Long before the invention of the internet, organising protests and rallies, especially off an anti-government nature, was a logistical nightmare. Today many countries have more mobile phones than they do people but not so in places like North Korea as the graphic illustrates.