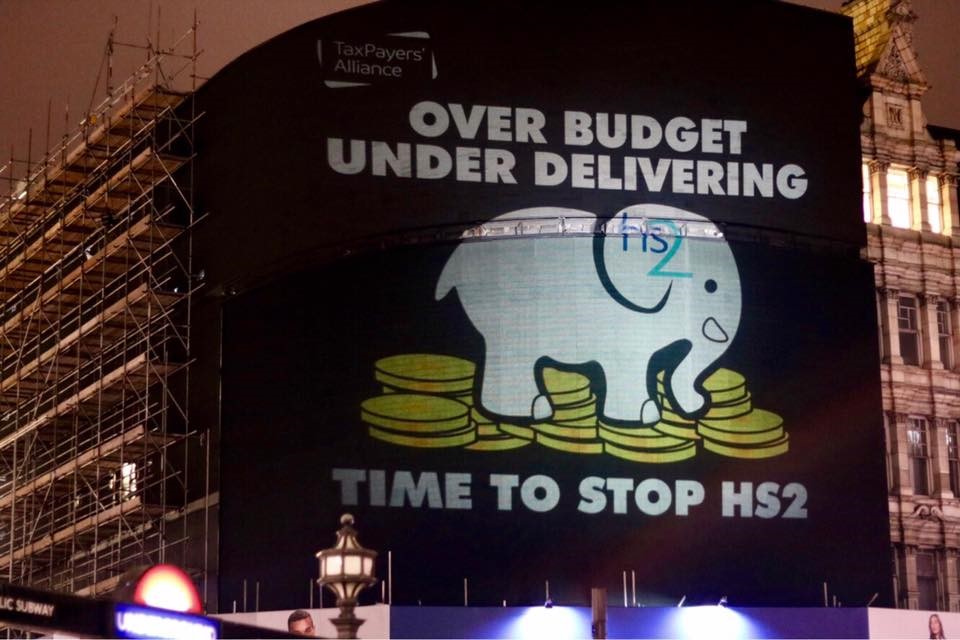 From day one, the TaxPayers’ Alliance has been rightly opposed to High Speed 2. We are all for transport infrastructure investment, but HS2 is far from the best use of taxpayers’ money.

Originally estimated to cost £36 billion, we correctly estimated that the cost would be far higher. In September 2019, ministers finally confirmed the cost of the project had risen to an upper limit of £88 billion (in 2015 Q4 prices).

The TPA has worked with politicians and campaign groups from all corners of the country in our bid to scrap HS2. In 2017 we projected a white elephant onto the usually illuminated advertising boards in Piccadilly Circus to draw attention to our campaign. We made headlines in print and local media, as well as explaining the problems with the project to millions on TV and radio. 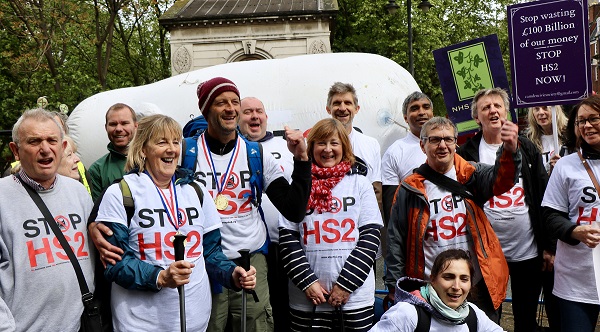 We have even walked part of the proposed line with Stop HS2 campaigners to highlight the devastating environmental impact of the scheme. Along the way we met home and business owners who will suffer all of the pain for none of the gain.

In 2018 we launched The Great British Transport Competition to find alternative popular transport projects to HS2. We asked all interested parties from across the United Kingdom to submit ideas for transport infrastructure projects. We received nearly one hundred ideas and after lengthy deliberation by our expert judging panel, 28 winning entries were chosen. The sum total of their construction costs came to £45.1 billion. 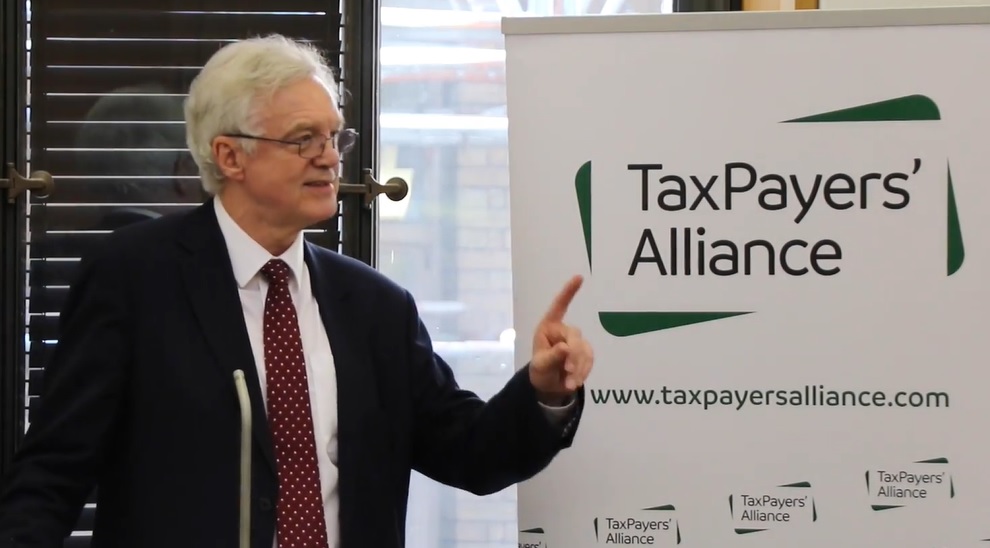 Published in May 2019 and launched by Rt. Hon David Davis MP, The Great British Transport Competition dominated media coverage at both a national and local level. We showed that for half the cost of HS2, the government could build 28 transport projects that the public actually want and in a much shorter time frame. The report was a key reason the government ordered a review of HS2.

Following the decision to proceed with HS2 we analysed the report that was instrumental in the decision making process. Commissioned by transport secretary Grant Shapps in August 2019, the Oakervee Review was designed to be an independent review into HS2. After carrying out a forensic analysis of the report we concluded that it is nothing more than a whitewash, written to suit political ends. On every front, from trains per hour to speed and environmental aims, there is simply no positive case to be made for HS2.

In November 2021 the government announced the partial cancellation of HS2. Phase 2b East was trimmed back with the money funnelled back into a number of projects that we recommended in our Great British Transport Competition.

Ministers heeded our calls and took a step in the right direction, replacing a part of this pie-in-the-sky project with hundreds of transport upgrades.

Looking to the future we hope that the new minister for HS2 will do everything possible to keep costs from further escalating. Scrapping the project entirely, the nation could save a small fortune and offer infrastructure upgrades across the whole country.

Have a look back through our archives to see more about our multi-year campaign against HS2.

Videos on the launch