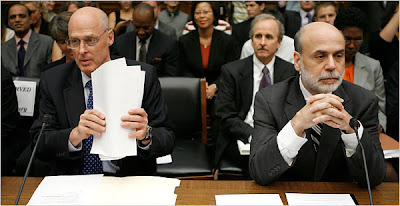 Not a good place for serious debate


Last night your correspondent gave up on the BBC hysteria of Mssrs Webb and Peston, and instead surfed the US News channels. He wanted to find out what's really going on with US Treasury Secretary Paulson's $700bn TARP (Troubled Asset Relief Program). Unfortunately, what he actually saw was enough political grandstanding to bring on one of his dizzy spells.

To start with, members of the Congressional Committee grilling Paulson and Bernake on live TV seemed concerned mainly with mouthing off for their constituents back home - long written statements followed by the weakest kind of underarm deliveries imaginable. They made our own Public Accounts Committee look like a lion's den in comparison.

Then one of the Washington TV pundits explained that the actual deal had already been done with Congressional leaders behind closed doors in one of their smokefree rooms. The Committee hearing was simply so Representatives could cover their own backs with voters: "we had to pass it because the Administration told us the world would collapse if we didn't - you heard them!"

Suddenly Senator McCain popped up in front of two US flags to announce he was putting his campaign on hold so he could personally supervise events back in Washington. He looked rather old and a little desperate.

Shortly afterwards Senator Obama appeared in front of another two US flags to say he was not putting his campaign on hold, and that McCain shouldn't have rushed out to grandstand for TV. Even though he himself seemed to be doing precisely the same thing.

The pundits on Bloomberg talked more sense. They said nobody has a clue how the Paulson plan will work in practice - even Mr P doesn't know that. But something has to be done, and this is it.

Oh, and taxpayers will likely get stuffed. Which is a shame, but what can you do?


We can only thank God we're not US taxpayers. The bankers have apparently panicked and blagged their way into a $700bn get-out-of-jail-free card.

OK, they're not quite getting out free - bank shareholders have already taken a serious whack, and banks will face much heavier regulation from here on. But being able to offload their toxic debt assets onto taxpayers is one huge weight lifted from their shoulders.

The key question now is price: at what price will the TARP buy these assets?

We've recommended the debate taking place on the FT Economists' Forum already, and there's a good summary of the pricing issue here. In the absence of a real market price from a functioning market, there are a wide range of possible pricing bases. They run from full nominal value - ie 100 cents to the dollar - to fire sale prices, which are maybe 20-25c to the dollar.

Clearly from a taxpayers' perspective it would be best to go for the fire sale - at that level, taxpayers might reasonably expect to get all their money back eventually. But the problem is that the banks can't afford to sell at that price - quite simply, it would wipe out all or most of their equity, and they'd have to shut up shop.

So the actual price is likely to be driven not by what this stuff's actually worth, but by what price the banks need so they can stay in business. Which means taxpayers will almost certainly overpay for the assets, while bank shareholders are left with the full equity stake in their now detoxified bank: a pure gift from taxpayers to bank shareholders.

Why on earth should taxpayers accept that?

A much more appealing idea (as we blogged here) would be for taxpayers to take a big slice in the equity of the banks. They'd still have to stump up the $700bn - or whatever it finally turns out to be - but they'd now have a share in the eventual upside from keeping the banks in business. Which means that existing shareholders would take less (ie they would be diluted): a much fairer arrangement.

Now, given the current crisis, it's probably too late for US taxpayers to insist on that. But it isn't too late for us.

What precisely is our government planning to do when another of our banks comes begging? Given the Crock fiasco, do they now have a plan? How will they ensure that any further bailouts are accompanied by bank shareholders being "crammed down" (which of course did eventually happen with the Crock, but only at the cost of full nationalisation).

What's the deal? It's time we heard so we can start debating it now, not in the midst of the next crisis.
This website uses cookies to ensure you get the best experience.  More info. Okay