Ahead of Wednesday’s Comprehensive Spending Review, the TaxPayers’ Alliance has recommended £43 billion of savings in its landmark Save To Spend report. The savings are found in 15 policy changes that will allow ministers to retain other spending promises.

The report explains how the impact of the coronavirus crisis on the economy has made it increasingly difficult for the government to retain its manifesto commitments. While long term borrowing is cheap, high levels of spending could lead to complacency with taxpayers’ cash, and no focus on value for money.

Recent tax increases have already created the highest tax burden in over 50 years, meaning that tax rises cannot be an option to balance the books. This has only been sharpened by the pandemic - the private sector has been decimated, so imposing taxpayer austerity on entrepreneurs and innovators would kill off the recovery.

Therefore, in order to keep its spending promises, the government must find savings elsewhere.

The TPA has today proposed a reform package that could deliver total savings of £43 billion next year, rising to £73 billion by 2025-26. These savings can be achieved through reorganising government, reforming pensioner benefits and more, unlocking opportunities for sensible spending commitments elsewhere. 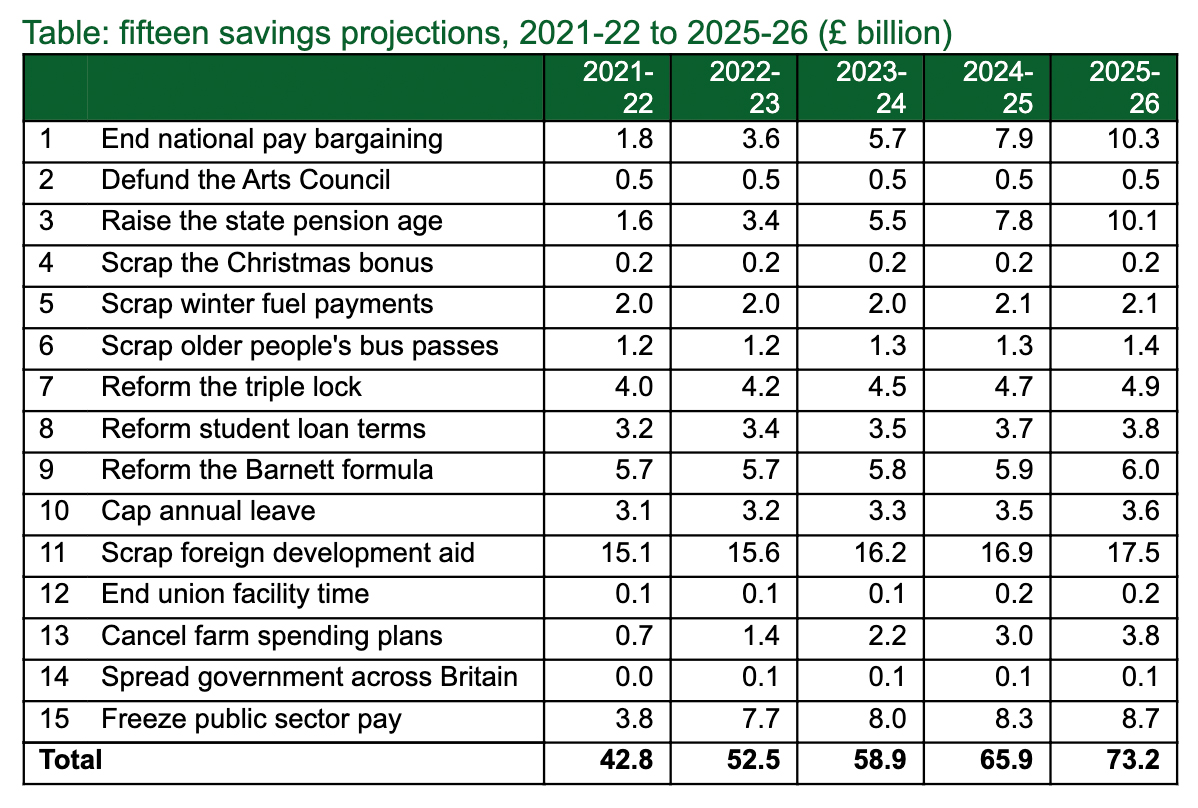 Scrapping the winter fuel payment could save £2 billion a year in 2021-22.

Scrapping free bus passes for older people could save £1.2 billion next year.

Reform the triple lock by adjusting the 2.5 per cent lock to a 0 per cent lock. Calculations by the Social Market Foundation estimated that this policy would save approximately £4 billion a year.

Increase the repayment rate to 15 per cent and simplify interest to a uniform rate of RPI plus 3 per cent. This could save £3 billion next year, as well as encouraging students to select more financially productive courses.

Trim this excess grant which Scotland receives relative to Wales to save £5.7 billion in 2021-22.

Annual leave entitlements should be brought into line with those in the private sector with a 25 day cap, plus bank holidays. This could save £3.1 billion in 2021-22.

Scrap the arbitrary target of 0.7 per cent of national income, around £16.6 billion, retaining £1.5 billion for humanitarian efforts, to save taxpayers £15.1 billion next year.

Taxpayers should not have to fund union activity. Eliminate grants, use of offices and equipment and facility time to save £137 million in 2021-22.

Planned spending on supposed public goods to replace spending on subsidies should be cancelled, which could save £0.7 billion in 2021-22, rising to £3.8 billion by 2025-26.

14. Move government offices out of London

Government offices (except ministers’ private offices) should be moved out of London to save money by using cheaper property and reducing spending on paying London weighting for staff. This could save £104 million annually.

Public sector pay should be frozen for two years. The Centre for Policy Studies has calculated that this could save £3.8 billion in 2021-22.

“The government’s manifesto commitments and the economic challenges of the coronavirus crisis can only be met with bold action that protects taxpayers.

“Ministers must refuse the tired argument that there is no more fat left to trim. If the government increases outgoings, it’s vital that it simultaneously saves to spend.

“To get the economy moving again, the chancellor’s spending programme must be balanced with big savings and an unapologetic war on waste.”