In an interesting series of three lectures given last year at the LSE, Professor Paul Krugman - Nobel laureate, NY Times columnist, and author of The Return of Depression Economics - attempts to explain why we taxpayers should not fret about the build-up of government debt.

One of his key messages is that the world as currently constituted may have a structural glut of savings. China and most other points East save too much, and unless someone else spends to fill the gap, the global economy may sink into the abyss of a new Great Depression.

Of course, until 2007, the gap was filled by high spending consumers in the US, the UK, Ireland, Greece and the other usual suspects. But their spending was fueled by wobbling unsustainable balloons of debt, and when the bubble burst, their spending collapsed.

So governments - essentially western governments - have had to step in. Keynesian deficit spending has been exhumed from the vault, dusted off, and put back to work.

But what about all the debt our governments are now accumulating? Isn't Krugman worried about that?

Well, no, not really. He thinks debts on the current scale are entirely manageable, and government interest costs relatively small. Anyway, one day, hopefully someone else will pick up the spending slack - through say, a surge in green investment - and at that point governments can start to reduce their debts.

We're not convinced. As we've blogged many times, the debt interest burden dropped onto us taxpayers by HMG is already starting to look ugly.

From a bill of £31.5bn this year, the Treasury itself forecasts it will more than double to £71.5bn by 2014-15. Actually, the Treasury refused to divulge this alarming figure - even when formally requested to do so by the Treasury Select Committee - but the Institute for Fiscal Studies has devised a cunning way to back out the Treasury's debt interest projections from the information that HMT does publish (see footnote 7 on page 192 of the IFS Green Budget).

Here's how it looks over the entire lifetime of the current Labour government:

Now, in fairness, for their first decade in power, debt interest costs remained pretty well behaved. Indeed, as Jeff Randall reminds us this morning, Chancellor Brown positively used to crow about it. In 1998 he was lambasting his spendthrift Tory predecessors, telling Randall:


"Interest payments on the national debt are £25 billion a year. We're spending more on national debt repayment than on schools or law and order, and that is a situation I don't want as a hallmark of a Labour government... The public borrowing requirement was £23 billion last year. We plan to get it down very substantially."

But as time went by, the continued good behaviour of interest costs was less a reflection of Mr Brown's prudence, and more an automatic response to the big fall in gilt yields since the 70s, 80s and early 90s. That fall meant that when old high coupon debt matured on Brown's watch, it could be refinanced at much lower rates, bringing down interest payments. Certainly, Bank of England independence helped that process by reassuring the markets about future inflation. But the key driver was the worldwide fall in yields - partly driven of course by Prof Krugman's global savings glut.

And just to be clear, HMT's projected increase in annual debt interest costs of £40bn between now and 2014-15 is the equivalent of 10 pence on the standard rate of income tax. 10 PENCE.

Or to put it another way, it's another £1600 of additional taxes for every single household every single year.

And actually there's worse. The Treasury's debt interest forecast assumes that HMG's borrowing costs stay pretty much where they are now - around 4.5%. But in reality, that's seems highly unlikely. Gilt yields (ie the interest rate the goverment has to pay) have already ratcheted up by around one percent from their lows last year, and look set to move higher: 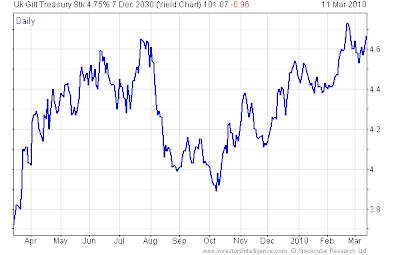 So what happens if yields move higher than HMT is assuming?

According to their own forecasts they are going to borrow a net £700bn between now and 2014-15. Add in the need to refinance £200bn of maturing gilts, and they will be borrowing a gross £900bn. Which means that every one percentage point increase in the interest rate they have to pay will, by the end of the period, add £9bn pa to annual debt interest costs.

Now, of course nobody knows how much gilt yields may rise from their current 4.5%, but as we've mentioned before, during the last real funding crisis back in the 70s they got as high as 17.5%. And even if they only went up to half that level, debt interest costs would exceed £100bn pa by 2014-15. Which would be a £70bn pa increase from current levels, or an additional £2,800pa tax for every single family.

This has always been a serious problem with deficit financing of the kind supported by Prof Krugman - the burden on taxpayers can very quickly become insupportable. The worry is that it's his and similar views that currently dominate official thinking about the massive build-up of government debt.

The return of depression economics is going to leave taxpayers with some depressingly big bills.