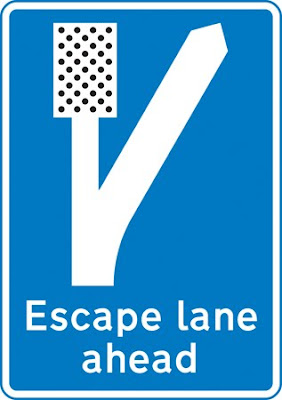 Yesterday George Osborne promised he would start cutting public spending on Day One:


“The message could not be clearer – if you find yourself on the wrong road, you take the first available exit instead of carrying on. With the date of the general election increasingly likely to be after the beginning of the next financial year, that means we will need to make early in-year reductions in existing plans.”

Good. Much better to let the spending departments know now, before they start spending the money, that they'd better not plan next year on the basis of Labour's announced budgets. And the first available exit is a very striking image.

Unfortunately, Mr Osborne still hasn't clarified either where the major cuts will fall or how big they'll actually be.

All he told us yesterday was that "excessive spending on things like advertising and consultants" will go, and "spending on tax credits for people earning over £50,000, and spending on Child Trust Funds for better off families will all have to be cut during the financial year."

Clear enough, but he already told us that last October (see this blog), and it still only totals £7bn. What's more, big chunks of his £7bn - including the public sector pay freeze - apparently cannot now begin until the year after next (ie 2011-12).

And just to repeat what we've said many times, £7bn comes nowhere near the scale of cuts we need. As we blogged yesterday, our so-called structural deficit is around 10% of GDP, which is £150bn. And that has to be the sighting shot for spending cuts (and see here for the Economist's take on how poorly our politicos are squaring up to this).

Now, to be fair to Mr Osborne, Labour have already announced some measures to address that £150bn gap. So maybe he figures he's already got them in the bank.

Unfortunately, as we blogged here, Labour's various fiscal measures don't get going until next year, and they add up to just over 3% of GDP by 2014-15. So even setting aside the fact that one-third of that 3% comprises Labour's further disastrous tax on jobs (ie the National Insurance increases), and the fact that most of their mooted spending cuts have not been specified, it's not nearly enough. Osborne needs to find another 6%+ of GDP, or more than that if he wishes to rescind the NI increases. So far, his announced £7bn amounts to just 0.5% of GDP.

Of course, he may be thinking that if he can talk the right kind of talk, the markets may let him off the hook. Maybe they'll be prepared to go on lending on something close to current terms (4-4.5% interest rates on gilts) and give him more of a breathing space.

But if he is thinking that, as we noted yesterday, he's dicing with disaster. The markets have so far been patient because they've been persuaded the Conservatives will deliver real painful cuts pretty well immediately. Should they fail, the market reaction would be swift and ugly.

Meanwhile, it seems that defence is being lined up for big cuts whoever is in power (see this blog). And this morning we heard that the Conservatives will attempt to ease the pain of that by raiding their previously ringfenced overseas aid budget.

The idea seems to be that some of the work currently done under the MoD budget in places like Afghanistan could be funded from the aid budget instead. In fact it sounds like some of the aid budget could even be used to fund security activities currently funded by the Home Office. According to David Cameron:


"We have a defence department, a foreign affairs department and a Home Office and they all work separately. We want to be thinking, how do defence and development work together?


When we think about what we do overseas, we have to think about how it can affect people at home....

Aid driven by national security rather than altruism: that certainly puts a different complexion on Mr Cameron's aid ringfence pledge.

As regular BOM readers will know, we have always been sceptical about our £8bn pa aid budget, believing it to be often misdirected and riddled with waste (see all previous posts gathered here). So we welcome any plan for root and branch reform - including the recognition that no spending programme is sacrosanct. But at first glance, this latest move has all the appearance of a violent swerve to escape a most ill-advised spending pledge. A sort of first available exit.

And if Mr Cameron can do this to his aid budget pledge, he can surely also do it to his much more ill-advised NHS pledge. He could extricate himself from that particular hook by, for example, using some of the NHS budget to fund activities currently funded out of the social care or welfare budgets.

Let's keep our fingers crossed - somewhere out there amid all the obfuscation and wishful thinking, it's just possible that reality is starting to bite.
This website uses cookies to ensure you get the best experience.  More info. Okay