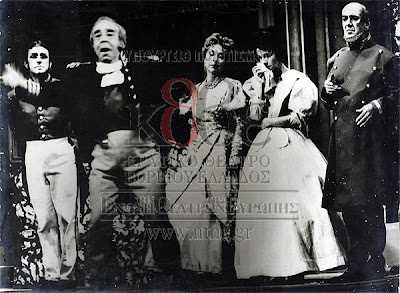 Autocratic regimes always employ legions of government inspectors. Their job is to tour round the various outposts of the centralised state and put the fear of God into local bureaucrats - to remind them who's boss.

It was back in 1836 that Nikolai Gogol wrote his classic comedy (pic above) about how the Czar's inspectors terrorised the officials of provincial towns in Russia. The play's joke is that the government inspector actually turns out to be a conman, who finally scarpers with his bribes and the mayor's daughter. But its underlying truth is that the inspection regime does nothing to contain the endemic corruption and inefficiency of the Czar's local officials.

Gogol could write virtually the same play today in Brown's Britain. In councils and schools and hospitals throughout the land, bureaucrats and frontline staff quake at the prospect of a visitation from the inspectors. The inspectorates now cover all aspects of local services, employ many thousands of inspectors, and have budgets running into hundreds of millions (for more details, take a look through the TPA quango report).

One of the most high profile inspectorates is Ofsted. It costs us £228m, has a staff of 2700 (2007-08), and is headed by Christine Gilbert, the wife of ex-Labour minister Tony McNulty.


"We inspect and regulate to achieve excellence in the care of children and young people, and in education and skills for learners of all ages."

Which gives it an extraordinarily wide brief. It now inspects and regulates not only schools, but also "colleges, initial teacher education, work-based learning and skills training, adult and community learning, education and training in prisons and other secure establishments, and the Children and Family Court Advisory Support Service (Cafcass)". Not forgetting childcare services (aka prosecuting members of baby-sitting circles), and childrens' social care.

It subsequently turned out their inspection had been little more than an elaborate box-ticking exercise, largely carried out by those actually being inspected. At the end of which, Ofsted praised the council for providing “a good service for children”, and improving their "life chances" - a sickening testimony to the uselessness of their inspections.

So how have they responded?

Well, by increasing the number of boxes that require ticking of course. According to those at the sharp-end, since the Baby P case, social workers have been submerged in a deluge of new bureaucracy. The chief executive of the British Association of Social Workers says:

“What social workers are having to do 80 per cent of their time is serve a bureaucratic machine, which actually has nothing to do with good social work and has everything to do with keeping a really ineffective inspection regime operating in a way that does not support really effective work with children and families.”


Which sounds spot on. And note the response of Childrens' Secretary Balls, when asked if he would intervene to stop the lunacy:


"The answer to that is no. The idea that social workers who are dealing with complex cases of potential child abuse or neglect wouldn’t be making records or keeping track of what they do doesn’t seem to make much sense."


Yet another here-today-gone-tomorrow politician who apparently knows better than the frontline professionals how they should do their job.

And if by any chance some courageous council might consider ignoring the government inspectors, and backing the judgement of their own people instead, they should expect swift retribution.

When Surrey County Council failed to tick Ofsted's child care boxes properly, it led to direct Whitehall intervention, with the departure of Surrey's Chief Exec, a string of other resignations, and a stinging public critique of the entire council delivered by the commissar parachuted in to conduct the purge.

Now a similar thing seems to have happened in Cornwall, where Ofsted has condemned local childrens' services for inadequate record keeping, and various other perceived organisational failures. Only this time, the Chief Exec immediately ran out into the market square to confess his council's shortcomings and promise they will obey all future orders without question. Local democracy it isn't.

Mr Cameron promises to take an axe to Labour's inspectorates.

He needs to. We've already suggested scrapping (or at least, hugely downsizing) the Audit Commission. And Ofsted should join it. Total saving £450m pa.
This website uses cookies to ensure you get the best experience.  More info. Okay