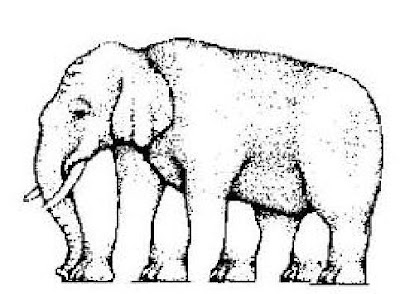 The government has been mercilessly mocked for the budget's assertion that it will conjure up £11bn through yet more of its notorious Gershon-style public sector efficiency savings.

Although not detailed in the main budget document, it transpired these savings are to include £550m pa from somehow making our heavily unionised NHS staff throw fewer sickies, and around £100m from the highly improbable introduction of "smart management".

And how's the rest of the £11bn made up? In an attempt to find out, James Committee veteran and TPA stalwart William Norton spent several hours sifting through a huge pack of explanatory notes from individual departments. He unravelled precisely how each of them intends to fulfil their mandated savings, and then laboriously added up the totals for each category of savings. Here's his summary (presented at yesterday's TPA budget briefing): 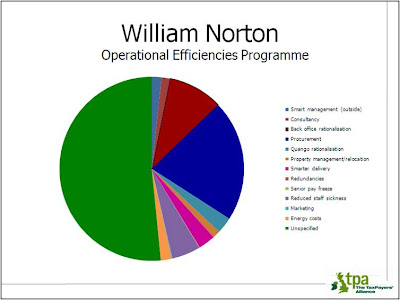 Now, if that's a little too small for you to read, don't worry - you can easily see that by far the biggest source of savings is the green bit, accounting for over half the £11bn total. And what's the green bit? Ah, that's the bit officially categorised as "unspecified". In other words, nobody has a clue how those savings will be made - they can't even come up with something half-baked.

And there's another important point to note here - not all savings are equal.

Although Mssrs Darling and Byrne implied that this £11bn was A Saving - as in "saving" - in truth, it's nothing of the kind. A saving Saving saves money. That's the point of it. But a government efficiency saving usually doesn't save anything - other than ministerial face, that is. More often than not, it's pure deckchair rearrangement, and doesn't release any actual cash to help with the deficit.

It was ironic that on the very day of the budget, the Office for National Statistics released updated figures for how public sector efficiency is really going. It says that NHS efficiency has been falling by 0.3% pa since 1995 - ie taxpayers have had worse and worse value out of every extra pound they've spent.

And that 0.3% pa fall is after taking account of various quality improvements the ONS thinks may have taken place. They are always very difficult to define, and so the ONS also publishes a series excluding them. And that's even more concerning.

In Labour's first 11 years, they increased health spending by an eye-watering 138%. But as we've blogged many times, much of that disappeared in excessive pay deals and other cost increases, and the ONS reckons the volume of inputs only actually increased by 67%. Against that, the volume of outputs only increased by 55%. So excluding those mooted quality improvements, productivity (ie outputs divided by inputs) fell by 7%, or 0.7% pa.

Just for the record, here's the ONS summary chart, excluding quality improvements, and breaking down the totals into the separate contributions of GPs (FHS on the chart), hospitals (HCHS), and GPs prescriptions (the volume of which has increased by a jaw-dropping 200%):

Of course, none of this is new: we all know that public sector productivity has been falling for years, and we now have the ONS analysis to show just how much.

But for some reason, politicians of all persuasions still reckon they can save money by making the arthritic public sector elephant dance, releasing gzillions of efficiency savings.

Well, we know why. Because if they confess that they can't save money by lifting efficiency, then they will be forced to admit that the coming spending cuts will mean cuts in services. Which might prove a tad awkward.

So what we get instead is a delusional and dishonest public debate in which the real issues don't get discussed at all.

Issues like breaking up the NHS, and replacing it with the European model of competing social insurers - a model that delivers significantly higher standards of healthcare for similar cost.

Issues like decentralising government, and making local authorities responsible for organising and funding local services - a structure that can deliver much greater levels of public sector efficiency (see this TPA Research Note).

And issues like downsizing government, and leaving people with more of their own cash to make their own arrangements with suppliers who can offer competitive prices based on real efficiency.
This website uses cookies to ensure you get the best experience.  More info. Okay