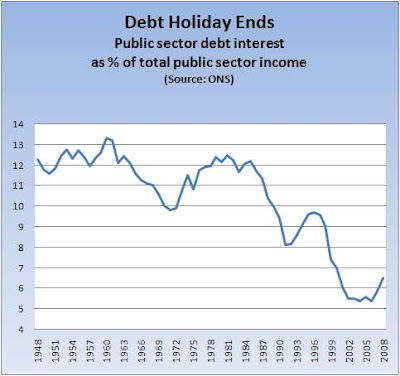 The only way is up

Bank bail-outs and the worst recession in our lifetimes mean that government debt is set to soar.

Well so what, says Mr Brown - as Keynes pointed out long ago, in circumstances like this responsible governments must borrow us out of recession. We can pay it all back eventually, and even if we can't, in the long-run we're all dead. Anyway our grandchildren will surely be delighted to pick up the tab.

Except of course, public debt chickens have a nasty habit of coming home to roost long before we're all safely dead.

There's the grim business of debt servicing - interest payments to you and me. Whether you're an individual or a government, it's a sad fact that the more you borrow, the more interest you have to pay. And as your debts mount, you find yourself paying an increasing proportion of your income just to meet interest payments. Which leaves a lot less for spending on other things, be they new cars, or schools and hospitals.

The chart above shows how this "income gearing" worked for successive UK governments over the last 60 years. The key point that jumps out is that right up until the late 80s, governments of all complexions routinely spent 10-13% of their income (ie our taxes) on debt interest. It was only in the late 80s that the interest burden started falling significantly, eventually reaching 5-6% in the early years of this decade.

And understand this - the 4 percentage point fall in the burden of debt servicing during New Labour's first term was absolutely crucial in allowing them to increase spending on other things. In today's money it was a free gift of around £20bn pa (or 6 pence on the standard rate of income tax). And it provided fiscal firepower to later boost spending on schools and hospitals without apparently undermining the budget.

Unfortunately, this entire process is now set to reverse, switching from a virtuous to a vicious circle. Indeed, the chart shows the burden has already increased from the lows.

So let's take a closer look at the history and see if we can pick out some lessons for good government.

Britain emerged from WW2 with crippling public debt: the official National Debt stood at 250% of GDP. Attlee's government attempted to keep down servicing costs via a so-called "cheap money" policy - keeping interest rates very low, generally below 1%. But with big debts, even that wasn't enough to get the interest burden below around 12% of government income.

So the first lesson is don't, whatever you do, rack up big debts.

Later, as our economy grew through the having-it-so-good 50s and early 60s, our National Debt shrank to around 100% of GDP by 1963. But the servicing burden remained stubbornly stuck at around 12% of government income. That was because the interest rate on government debt (gilt yields) had more than doubled during the 50s. Why? Because inflation had begun to take off, and government bond investors were demanding higher yields in order to compensate for the inflationary erosion of their bonds.

As the 60s gave way to the hyper-inflationary 70s, gilt yields moved even higher, reaching 17%+ in the dark days of 1974. The debt servicing burden - which had fallen a bit as a result of emergency budget cuts in the late 60s - soared right back up above 12%.

So the second lesson is don't, whatever you do, rack up inflation.

It was only under Thatcher that government finally got a grip. Robust public spending restraint (eg see this blog), combined with tough(ish) monetary policy finally got both debt and inflation heading down. And taxpayers reaped a huge benefit in terms of the debt servicing burden, a benefit exploited to the full by New Labour.

So the third lesson is do make absolutely sure you keep a tight grip on public spending and monetary policy.

And against these lessons, how is Mr Brown stacking up?

With a Keynesian splurge, and an abandoned inflation target, the answer is painfully clear. Our holiday from heavy debt servicing is over, and taxpayers will soon start feeling the consequences.