Hernando de Soto wrote in his 2000 book The Mystery of Capital that if America met the obligation to spend 0.7 per cent of national income on overseas aid, it would take 150 years to exceed what the world’s poorest had in savings. Global remittances– money transferred home by workers overseas – are set to hit $516 billion in 2016, according to the World Bank.

The developing world is growing at an astonishing rate. The removal of trade barriers and an embrace of free markets means that countries in Africa, Asia and South America are growing very rapidly. The Pew Research Center, based in the United States, undertook an international survey in which almost 50,000 people were questioned in 44 advanced, emerging and developing countries. The results were that a clear majority of the world wants more freedom to trade and grow.

But the money given out by the Department for International Development generally doesn’t deliver more freedom. A study by the TaxPayers’ Alliance found that foreign aid spending has no bearing on the freedom of ordinary people, the press or business in developing countries.

The focus should be on ensuring that trade barriers are removed rather than self-importantly believing increasing our aid budgets is the answer, no matter how well-intentioned. As a rich nation, we can – and do – play a significant role in assisting in disaster zones, including medical disasters. But when many emerging economies are forecast to overtake traditional European powerhouses in the course of this century, we should make sure any money we send overseas is targeted in the right areas rather than misspent on development projects that do not deliver. 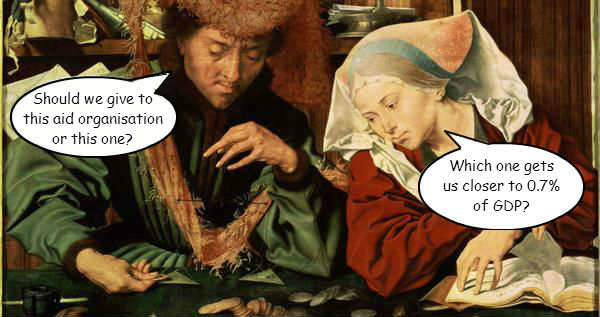 The burgeoning aid industry too often confuses inputs with outcomes. For example, a report from the Independent Commission for Aid Impact (ICAI) found that a £1 billion education programme in east Africa, funded by DfID, did not greatly improve the educational outcomes of the children there. That is simply not good enough.

Another ICAI report found that projects funded by UK aid are pushing both poor and rich alike “towards corrupt practices.” The chief commissioner of the ICAI in full said in the report:

We saw very little evidence that the work DfID is doing to combat corruption is successfully addressing the impact of corruption as experienced by the poor. Indeed, there is little indication that DfID has sought to address the forms of corruption that most directly affect the poor.

While departmental budgets are facing necessary restraint in the UK, the DfID budget is set to be locked to the same arbitrary, unsustainable and ideological target of 0.7 per cent as mentioned above. In 2019–20, 0.7 per cent of forecast national income will equate to £15.5 billion. Abolishing that spending while allocating £1 billion for humanitarian efforts would save taxpayers £14.5 billion.

In order to get real and drastic tax reform, substantial savings must be made. Scrapping DfID and moving responsibility for disaster relief into other departments would refocus our spending priorities and ensure that British taxpayers’ money is not wasted on vanity projects, lost to fraud or corruption, or spent on other schemes which simply do not deliver results for the very people they are designed to help.