The War on Waste in Tower Hamlets

Last Tuesday the War on Waste came to Tower Hamlets, a borough which has become a byword for bad local government. Tower Hamlets was described by local government minister, Eric Pickles, as a “rotten borough” and things have got so bad that the auditors have had to be called in. There could hardly be a better place for us to campaign against waste. 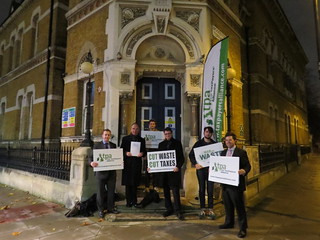 We were joined by community figures, local volunteers, and TPA activists, meeting outside the old Poplar Town Hall which was notably one of Mayor Lutfur Rahman’s more questionable property deals.

Our leafleting campaign in Brick Lane later that evening proved immensely popular. Local residents and restaurateurs were united in their disdain for the council and its poor track record. Many people in the borough are not well off, and find it deeply offensive that their representatives lavish their hard earned cash on such luxuries as a chauffeur driven Mercedes. There is anger locally and the current leaders of Tower Hamlets Borough Council are not popular.

All councils must be held to account, and the TaxPayers’ Alliance will continue to take our War on Waste around the country.