The TaxPayers’ Alliance has done research on waste in the NHS recently including poor energy and water and estate use.

And many of the points we have been raised are echoed in the Carter Review published today.

Similar to our findings, Lord Carter found there was “unwarranted variation” in provision and estate and facilities use. Likewise, bed-blocking costs £900 million per year and forces hospitals to outsource care to private providers at further cost. The salient point being that this variation could be costing as much as £5 billion.

The full table is copied below. 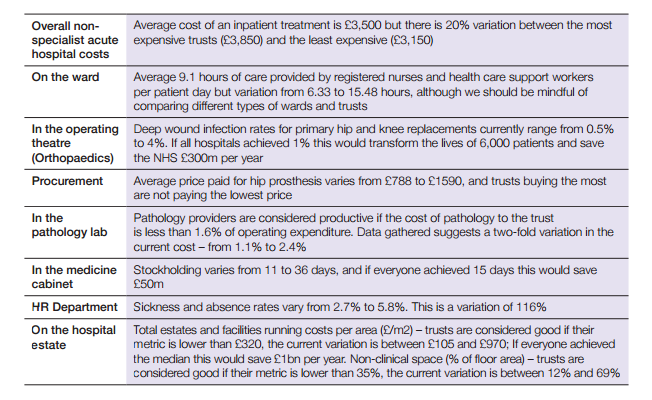 The TPA has previously highlighted the waste from drug stock write offs and the potential savings available by greater use of generics instead of branded medicines.

And our Research Director, Alex Wild, has analysed the increase in consultants and non-clinical staff on the books as well as the rises in managerial pay. He also pointed out that our record in capital investment can be quite poor as we have fewer MRI and CT scanners per capita than many poorer countries. And of course our NHS Rich List found that there are at least 50,000 NHS employees who received total remuneration over £100,000.

So the TPA views the publication of the Carter Review as a reinforcement of what we have known for some time: there is waste in the system. More radical reform of the NHS may be necessary in due time but the first step in safeguarding the NHS finances would be to cut out the waste so that taxpayers’ money can be focused on patient care.