Election season is now upon us, and one pledge rumoured to be a key feature of the Conservative party manifesto is a cap - the details of which still unclear - on energy tariffs. If this sounds familiar, it’s because back in 2013 Ed Miliband, then-leader of the Labour Party, proposed something in this vein: a 20-month price freeze on gas and electricity bills. While what is being floated this time around would resemble a cap on ‘standard’ tariffs, likely based on the relative value of the energy companies’ lowest cost equivalents, it is important to remember why these proposed caps are damaging to consumers.

It is not news that the ‘big six’, the UK’s largest energy companies together supplying over 95 per cent of homes, are often accused of hiking prices in order to squeeze more profit from their customers. Rarely a week goes by without some story or other making such claims. But are they based on fact? Well, if they are, energy companies are doing a brilliant job of hiding all this extra profit. Indeed, last month it transpired that out of the average annual household gas and electricity bill from British Gas, under five percent is post-tax profit, or in other terms, a £52.62 profit from a £1,122 bill. It doesn’t sound especially lucrative, especially when we take into account the costs recent government-implemented environmental subsidies are suspected to have added to the total household bill –with sources suggesting that it’s going to hit around £100 per year.

So why are profits so low when our energy bills are so high? Energy production and delivery is an expensive business. Wholesale energy and transmission costs make up just under two thirds of your bill, and that’s before corporation tax, VAT and the cost of environmental and social policies, such as the Feed-in Tariff and the Warm Homes Discount, land. As the push for more renewable technology intensifies, the National Grid, which is responsible for getting electrical energy from A to B, sees increased strain on its ageing infrastructure. This is because energy from solar and wind generation technology proves an intermittent source which needs careful managing across the grid (at a cost to bill payers). The rise in fossil fuel wholesale prices - something that is out of the control of the big six - has to take a large share of the blame in rising bills. With our offshore oil and gas production seeing a long-term decline and an increase in the UK’s reliance on imported forms of energy, rising wholesale prices for the energy companies are being passed down to consumers. 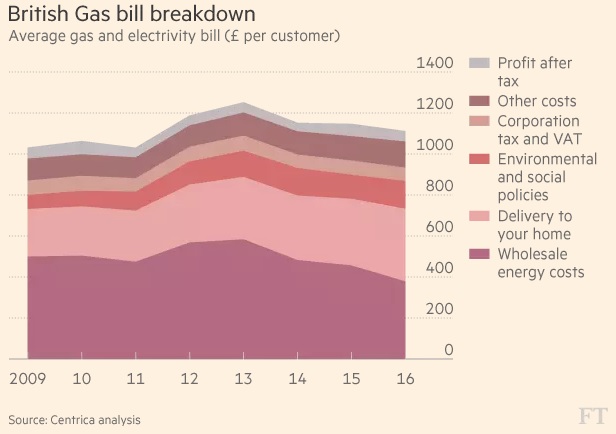 What would a potential price cap do? Well, analysts suspect big six company Centrica’s operating profits would be slashed by £332 million in the first year. Great, lower bills, right? Not exactly. As the Chief Executive of Centrica put it: “Managing the risk around supplying energy is not for the amateur to play - it is very complex… I would worry that if there is price regulation, more companies would find it difficult to manage... and would probably go out of business or more companies would say: This market is no longer attractive; therefore, I don’t want to be in it.” Fewer energy companies means less competition, thus less of a drive to keep tariff prices competitive, especially if you’re an energy company with other factors to compete on, such as an established, well-run customer experience model. Currently, market conditions mean that we only have around 50 energy companies in the UK, and with price caps this would likely fall. It is optimum for the consumer to have as many choices as possible when picking an energy supplier.

So how can we keep energy prices from rising this quickly without a price cap? There are several things that need to be done to stop the rapid rise in the cost of household energy, and the first starts right at the source. We have vast resources of natural gas and oil and should be looking towards utilising our onshore supply. By increasing our domestic energy production we could reduce the price volatility in the wholesale market and lower the costs for companies, and thus consumers. This mean the government opening the door to companies that want to use hydraulic fracturing, or fracking, to access our underground supply.

The government can further help bring down the cost of energy by re-evaluating the environmental subsidies handed out to producers of renewable energy. This growing sector is no longer a backroom start-up, but a fully-fledged industry. While it is argued that it needs a helping hand to become fully independent, the onus should be on competing providers of renewable technologies to improve their product to bring down the long-term costs associated with installing these systems. Frankly, taxpayers shouldn’t be footing the bill for inefficiency in the private sector.

Another way to lower bills is to encourage consumers to shop around for a low cost tariff. Switching is now easier than ever, with websites like uSwitch and MoneySuperMarket comparing tariffs for you and providing advice on how to switch. Evidence suggests that by not switching, a good deal of people are overpaying on their bills.

Using energy efficient technology is also important. When replacing electricals try to make sure they are rated A+ or above, and don’t waste electricity by leaving lights on when they’re not needed and keeping your fridge door open for long. This all sounds like common sense, because it is, but it can have a great impact on your bills.

So before the Conservative Party launch an offensive on UK energy companies, they should take a long hard look at what’s behind the rise in energy prices and what a future government should do to fix these problems, because ultimately a cap on household energy prices will hurt not only the market, but the consumer.