We all know Hull - outright winner of Britain's Crappest Town award, butt of a million cruel jokes, and scratching a jobless joyless life in the grim shadow of Prescott Towers. And yet, as we drove in over Harold Wilson's enormous white elephant Humber Bridge to deliver our son to the University, your correspondent wasn't thinking poverty and decay at all. He was thinking City by the Bay.

Of course, Hull is never going to have California's weather. But it does have San Francisco's fantastic waterfront location, even including a spectacular bridge. And it does face out to the world, especially those massive European markets.

So how come it isn't a booming city of the future?

The collapse of the fishing industry? Less than ideal obviously, but SF faced the same, and it managed to develop replacement industries. Why's Hull been so... well, crap?

Communications? Well, yes, the dual carriageway link between the Bridge and the A1 southbound has never been finished (hence the white elephant tag). But even without that link, Hull is still coupled up to the motorway network.

Well, could it be lack of government support?

As we blogged here, for 50 years British taxpayers have pumped billions into places like Hull, all in the name of regeneration. And it has been a complete and utter flop. The money has gone in all right, but the regeneration has never materialised.

So what to do? Over the last week, we have had two reports making radical suggestions.


First, the TPA's own report on Labour's Regional Devlopment Agencies (RDAs). They've spent £15bn of our cash since 1999 and achieved virtually nothing (other than a few more thousand well paid quangocrat jobs). As the TPA report demonstrates, all those billions have failed to lift regional growth rates (they've actually fallen), failed to lift regional employment, and failed to close the gap between the leaders and the laggards.

"Abolish the Regional Development Agencies [which] would have no negative impact on the regions, given the RDAs' failure since 1999. Their 2009-10 budget of £2.19 billion could then be used to pay for a 4p cut in the Small Business Rate of Corporation Tax - from 22 per cent to 18 per cent. Reducing tax on small businesses would create new jobs, boost existing businesses, make life easier for people starting business and give the regions an economic leg-up: exactly what the RDAs were meant to do and have failed to achieve." 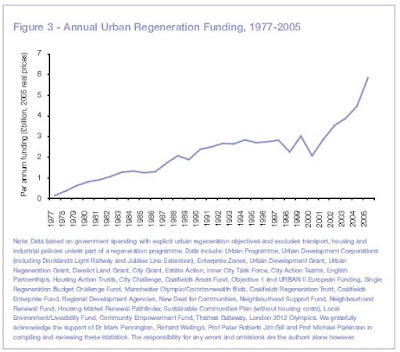 Why's it gone up so much? Yes, that's right:

It stinks, and taxpayers should be screaming foul. Especially when they see what little good the cash has done in recipient areas, where it's achieved little apart from the demolition of many fine Victorian houses, and the building of a few arts centres entirely unwanted by the vast majority of the local population (see previous blog).


Well, unfortunately, as they themselves put it, they went a bit barmy. They grabbed headlines by suggesting maybe we should close down the North altogether; Northerners could be moved down South, and accomodated in massive new housing developments. Understandably, and despite the fact that Policy Exchange is a Tory moderniser thinktank, David Cameron immediately branded the report "insane".


Which is a shame. Because lurking in the report's 63 pages, there are some sensible ideas. In particular, they suggest taking all the money currently spent on these useless top-down regeneration programmes, and giving it to the local authorities directly to spend as they wish - including local council tax cuts.


That's more like it. As we've said many times, we desperately need fiscal decentralisation. Divvying up the urban regeneration budget doesn't get us all the way to where we need to be, but it would be a significant move in the right direction.


And think what it could do for Hull. If the city council could get its hands on the cash poured into Labour's top-down regeneration and development programmes, then it would have some real say over its own affairs. Imagine further it was allowed to escape the crippling effects of national public sector pay scales, national minimum wage rates and national over-regulation of business. Imagine it could set its own business and council tax rates. Imagine it could choose to cut local public spending to fund tax cuts. What might happen then?


Business taxes could be slashed. Business would look at Hull in a whole different way. Suddenly it would be profitable for existing businesses to expand, and new businesses to move in/start up. Maybe not Silicon Valley, and certainly not a magic bullet. But suddenly Hull's destiny would be back in its own hands.


And remember something else: location does matter. As Prof John Kay and others have argued, in economic development terms, geography matters a lot. And while Policy Exchange may reckon Hull's geography is a burdensome leftover from our industrial past, looked at another way, it's actually a huge advantage. Because Hull isn't in the back of beyond - it's well under 200 miles away from Europe's most dynamic growth region. How much better placed it is than the bombed out industrial cities of Eastern Europe.


I promise you, Hull is blessed. We should probably all use the property crash to snaffle some of the new waterfront apartments they're building. Trust me.


Update Last night Kirsty Wark interviewed John Prescott on Newsnight. The subject was this Policy Exchange report, but she allowed Prescott free rein to lash out at what the evil Tories supposedly did in 1427. She also failed to register any objection to his ludicrous assertions about the success of his regional policies (slammed by virtually everyone who's ever looked at them seriously, including the NAO). For example, on Hull, he revealed that he'd given the city £1bn of our money, and the place is transformed - "the skyline is full of cranes... people are moving back into the city centre... etc". What he didn't mention was that since 1997 Hull's GDP per head has fallen even further relative to the UK average (see ONS data here). Needless to say, Kirsty didn't mention it either.