The TPA today calls on politicians from all parties to look again at the evidence showing that tax cuts can bring in more revenue by encouraging economic growth. A debate is raging about the need to spend more taxpayers’ money on the NHS and social care, the Armed Forces and the Police - but most of the answers are lazy calls for higher taxes.

Recently, there have been the following suggestions:

But other developed countries are going in a different direction. In Australia, the Government has passed a budget which will cut income tax by $144 billion over the next seven years. Over 10 million Australians will benefit from a reduction in their tax bill, with 4.4 million saving over $500 dollars.The Australian Government will also be pressing ahead with plans to make cuts to company tax.

As our new analysis shows, the Tax Cuts and Jobs Act in the US is showing early signs of success, too. By 2019, all income tax bands will see an average reduction of 1.7 per cent in federal income tax. The corporate tax rate has been reduced from 35 to 21 per cent.

Evidence shows that reducing tax rates can bring in more revenue. For example, in the UK: 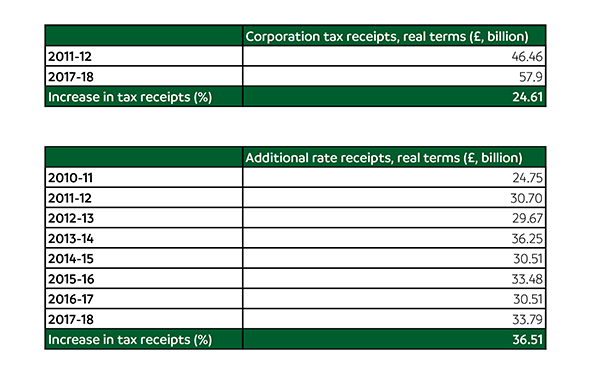 And in the United States: