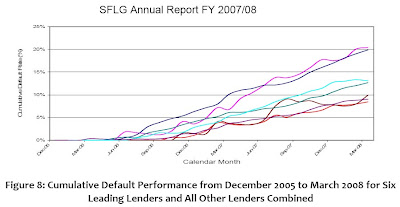 Amid all yesterday's talk of headless chickens and the traditional green shoots,the likely costs of the government's new company loan schemes got a bit overlooked.

The biggest scheme involves taxpayers in guaranteeing £20bn of short-term bank loans to small businesses. Specifically, taxpayers are required to guarantee half of that, the rest of the risk remaining with the banks. And then there's another £1.3bn of longer-term loans, and £75m of equity investment. Overall, it seems taxpayers are being put at risk for some £11.3bn.

Nobody can say if this will significantly moderate the slump. But what taxpayers need to know is how much we're going to lose from all the defaults we're ineviatbly going to suffer?

Lord Mandelson reckons that defaults on the £10bn chunk will cost us no more than £225m. But that's only 2.25%, which looks implausibly low.

Because defaults on Labour's existing Small Firms Loan Guarantee (SLFG) scheme reached a cumulative 13% in just the first two years of its existence. And that was only up to March 2008, well before the economy fell off a cliff. The chart above is taken from the latest SFLG report and shows soaring defaults right across the programme

So overall, if we're guaranteeing £11.3bn in the teeth of the worst slump since the thirties, the default losses are going to be BIG. £225m won't be close. We're probably talking billions.