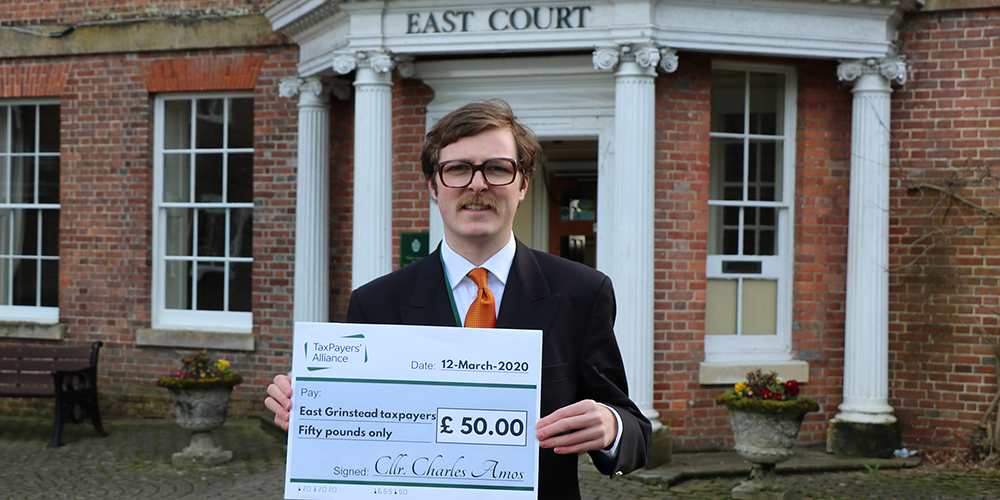 This week the chancellor gave the first post-election budget, setting out a series of serious spending promises. It’s critical to remember, however, that plenty of wasteful spending and excessive taxing happens at a local level. It is little wonder that council tax is among the least popular of all Britain’s taxes. In our landmark polling last year, more than three quarters of those polled supported a cap on council tax rises. Support for this is 13 per cent higher amongst working class voters, the most popular policy option we tested.

The TaxPayers’ Alliance’s (TPA) vision for a “country with lower, simpler taxes funding better public services” ought to apply equally at all levels of government. Arguably, local authorities are the bit moving furthest away from these principles.

Last May, East Grinstead Conservatives were elected on a manifesto pledge to “Keep Council Tax down.” Despite this pledge, just months later they proceeded to raise taxes at town level by the largest rate in over 15 years, and above the rate of inflation at district level.

I objected to this and as a result was thrown out of the Conservative group. “Down” was relative, they said. Putting town council tax up by 6 per cent was keeping it “down”, because it could have gone up by a higher rate. Under this reasoning a 100 per cent tax increase would be allowable, since the rate could have been put up by 200 per cent.

Almost every measure the council have so far proposed is one to increase taxation, spending, and regulation. For the country to flourish, politicians must be held accountable for their decisions. It’s for this reason I was willing to risk dismissal to oppose the tax increase. I could not honestly make any future pledge to my constituents if I betrayed the fundamental promise our manifesto made to them. But it becomes nigh on impossible for the public to hold their representatives accountable when there is such a universal willingness to break promises.

This is only one example, but it reflects a problem in local government across swathes of the UK. So many councillors do not think it their responsibility to “speak up for taxpayers to those in power” - another one of the TPA’s core principles. They do not think their individual constituents want to pay less tax. Rather, a generalised view of the need to help the “community” emerges, a need which always requires public money and councillors to make decisions. Essentially, councillors end up believing they know what’s best for people.

Whether it is to grant funds to sports organisations, to run a flower competition or to hold a music festival, councillors up and down the country genuinely believe what they are doing is in the general interest. But they have lost sight of the rights of individual taxpayers to spend their money as they please. When councillors defend a programme by saying it is good for the “community”, what they really mean is that it is good for a subset of the population. The above programmes benefit no more than one in five of East Grinstead’s residents. But all ratepayers are forced to cough up.

At the most local level, the line between elected councillors and civic groups is often blurred, as many of them sit on the boards of those same sports organisations, flower competitions or local theatres. The lobbying of councillors then need not even occur, as councillors can almost indirectly guarantee funding for their own pet projects. This is not so explicit the public catches onto it; a councillor will not sit at the table and make the case for his own group. Quite rightly they have to leave the room when discussing issues they have a direct interest in. But there is a worrying willingness to give huge amounts of money to known civic groups.

Information on the preferences of individuals is spread amongst the whole population, and is impossible to collect, process and act on. These civic groups will never truly and totally represent local people. The interests of “community” groups are just that; the interests of specific groups. They can never be a replacement for letting individual taxpayers keep more of their own money.

If councillors wish to do the best for their local residents they ought to slash taxes and allow people to decide what they value most. But it’s only going to happen if they have the conviction to do so, and know that if they do, organisations like the TaxPayers’ Alliance will be there to back them up.

That’s why I recently returned a portion of my taxpayer-funded councillor allowances. These are already very generous and I felt a recent increase was unnecessary and a further burden on hard working local taxpayers. I hope my fellow councillors and indeed politicians across the country will follow my lead.