In theory, there’s nothing not to like. The planned new “Garden Bridge” across the Thames will no doubt be a striking addition to the capital’s already stacked roster of tourist attractions.

Designed off the back of the (relative) success of New York’s High Line, the Garden Bridge will span the river between The Temple on the north side and the South Bank’s Bernie Spain Gardens. It’s received support from Joanna Lumley and will be designed by Thomas Heatherwick, who designed the stunning cauldron showcased during the 2012 Olympics. Planning authorities will make decisions in the next few weeks as to whether it will go ahead.

One does rather feel like the proverbial cynic, knowing the cost of everything but the value of nothing. But it would be irresponsible not to look at the cost, considering the overriding problem Britain as a country faces on a daily basis – the £1.4 trillion debt burden that costs us more than £50 billion (and growing) a year.

When the Garden Bridge was first announced, it was claimed that it would require not a penny of public money. However, that figure has been revised upward: £30 million will come from City Hall, and £30 million from a newly generous Treasury.

Frankly, there’s little practical use for the bridge. The Temple abuts Blackfriars Bridge on one side and Waterloo Bridge on the other, so the likelihood of anybody using it for purely practical reasons is unlikely – particularly as both of those bridges are serviced not just by taxis, buses and have space for bicycle travel. Thanks to the bend of the river, the gap between Waterloo Bridge and Blackfriars Bridge on the South Bank is even shorter. There are 7 pedestrian crossings in the stretch from Westminster to the City of London, and one more – which will preclude cyclists, the fastest growing mode of transport in London – is simply unnecessary, regardless of how assuredly pretty it will look. 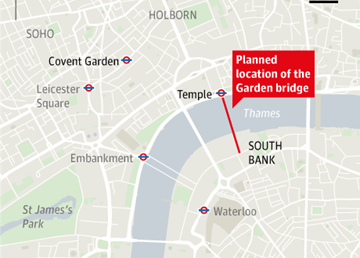 Where we do need additional river-crossing capacity is far further east, away from the tourist hotspots of central London. As London expands, new housing for the millions of people working in the city will need to be built, and unless we relax restrictions on the green belt or on height and view restrictions in central London, the vast majority of that housing is going to have to be built in east London. So unless we undertake an overdue liberalisation of planning, new property in east London looks like the only realistic way we’ll see house prices in London remain even remotely affordable for people on average to low incomes. But as Andrew Adonis has pointed out at length, the only way this will happen is if the transport infrastructure is in place.

Currently, we rely on just two tunnels east of Tower Bridge before we get to the Queen Elizabeth II Bridge at Dartford. That’s plainly not enough to facilitate road travel across the two sides of the river – both tunnels are gridlocked, or worse, at rush hour. The Emirates Cable Car (cost to taxpayers: £24 million) has been precisely as useful as anticipated – in one week last year, it was shown to carry a grand total of four commuters. Allowing commuters to traverse the river in east London would create exactly the kind of economies of scale that would allow business to boom in an area that has for too long been deprived.

The point is this – if London is going to seriously address the cost of housing in the city, it needs to build out. That requires infrastructure, and infrastructure spending. In a time in which there is not a particularly plentiful pot from which to draw that spending, you have to spend it very wisely indeed. If you’re going to build a bridge, it must deliver real value – not in abstracts like “tourist numbers” but in clear benefits for Londoners and for London. It’s hard to see that in the Garden Bridge – it’s easy to see in plans for an East London crossing like the proposed Silvertown Tunnel or a bridge between Greenwich and Newham to relieve pressure on the Blackwall Tunnel.