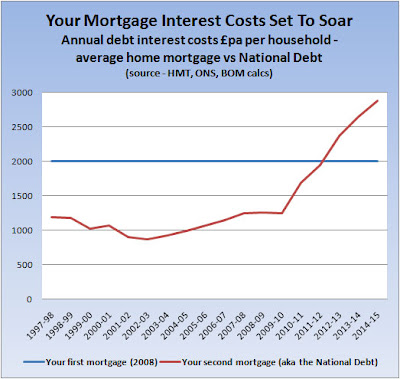 Although ignored by those arguing for continued high government borrowing "to prop up the economy", borrowing unfortunately costs money. And under the government's current deficit spending plans, the average household will soon be shelling out more in taxes to pay interest on the National Debt than they are paying interest on their own mortgage.

But since then, the National Debt has begun to soar, bringing with it much higher interest costs. By 2014-15, even on the government's own highly optimistic projections (see this blog), costs will reach nearly £73bn pa. That's £2900 pa for every single household - way more than their own average mortgage interest bill (especially since average rates on existing mortgages are down since 2008).

So there we are. You may have thought your biggest and most onerous debt was your mortgage, but it isn't.

Your biggest most onerous debt is the government's spiralling credit card bill.

PS There's a curious argument around that National Debt interest isn't really a problem because most of the debt is held by investors inside the UK. The argument was repeated by the lead signatory of this letter from various university academics opposing the Conservative's £6bn efficiency savings. But even if it were true (and actually nearly one-third of the debt is owned by overseas investors), that's a bit like saying that the government employing a few more hundred thousand nappy outreach facilitators doesn't matter because they all live in the UK. It matters to taxpayers who have to foot the bill.
This website uses cookies to ensure you get the best experience.  More info. Okay