Our Stamp Out Stamp Duty campaign has borne fruit today as the Chancellor scrapped the notorious ‘slab’ rate structure. Despite hiking the rates, this change means a big cut in the bill for the vast majority of home buyers. As Chief Executive Jonathan Isaby put it, “an early Christmas present”. Reducing a big financial barrier to home ownership - an aspiration many people share – is to be applauded, and today’s reforms have cut one of the most painful costs of house purchase for 98 per cent of buyers.

But it's not all good news. Careful analysis shows certain anomalies with the rates of stamp duty paid on properties just below £1 million, where Stamp Duty will be more expensive under the new system by as much as £3,750. And the punitive rates faced by buyers of very expensive properties have been hiked from 7 per cent to almost 12 per cent. 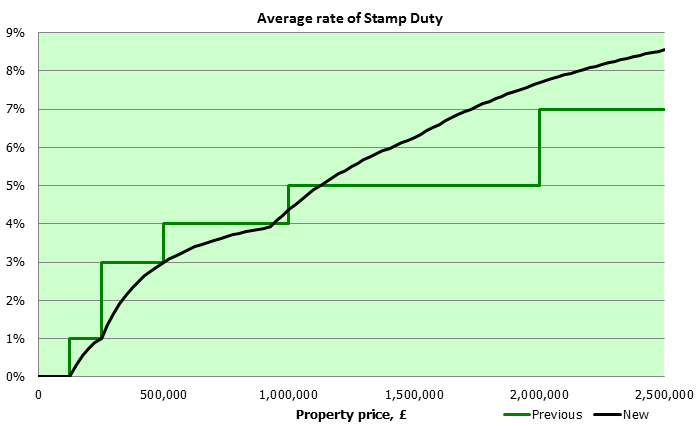 George Osborne may have been especially harsh on the higher end of the market as a political counter to the Mansion Tax proposals. To prove this isn't the case, he should follow our advice.

We recommend a reduction in the Stamp Duty rates (first proposing to halve them). Alternatively, we recommended doubling the thresholds. One other idea is the regular updating of the thresholds in order to offset house price inflation. This will stop people being dragged into taxes by fiscal drag, as happens so often with taxes that are originally intended to hurt the rich. (Indeed, this is one of the main reasons why we oppose the Mansion Tax.)

Today's announcement is a strong first step to doing away with this most pernicious of taxes which does so much to gum up property markets and make it unnecessarily difficult for homeowners to move when they need to. Whether a home is bought for £200,000 or £10,000,000, it is likely that this wealth has already been subject to Income Tax and National Insurance contributions. There is a long road ahead to win a full victory, but the Stamp Out Stamp Duty campaign has certainly helped get us on that road.