The TaxPayers’ Alliance (TPA) was launched by Matthew Elliott and Andrew Allum in early 2004 to speak for ordinary taxpayers fed up with government waste, increasing taxation, and a lack of transparency in all levels of government. No party was standing up for taxpayers and nearly all politicians were committed to bigger government, higher spending and secretive deals behind closed doors.

The TPA sought to challenge this status quo. The United States, Germany, France and Italy all had groups dedicated to defending taxpayers against new taxes, exposing waste and putting forward the case for spending restraint. The TPA was set up to ensure that British taxpayers were no longer ignored by politicians.

The financial crisis in 2008-9 focused minds on how government was spending taxpayers’ money. Politicians were forced to face the consequences of years of unrestrained public spending and unsustainable levels of debt. Many of the policies we recommended were implemented, including a public sector pay freeze, the abolition of many quangos, an end to local government sponsored lobbying, and extensive welfare reform. We ensured that spending decisions were transparent and that taxpayers were not unfairly forced to bear the consequences of politicians’ mistakes.

Today, we fight to reform taxes and public services, cut wasteful spending and speak up for British taxpayers. We believe in a pro-enterprise country with lower, simpler taxes funding better public services through innovation, automation and the eradication of waste. We have equipped a grassroots network with the tools to spread our message to millions, both on the ground and online. We have spoken up for taxpayers to those in power and brought our vision to the heart of government.

Our annual reviews are a great place to see how we have built the campaign over the years. Click here for the full archive.

Over the years, we've produced several handy pocket-sized factbooks filled with all kinds of stats and data. Click here for the full archive.

In 2019, we celebrated our 15th anniversary. Click here to download your free copy of our special publication that marked the occasion. 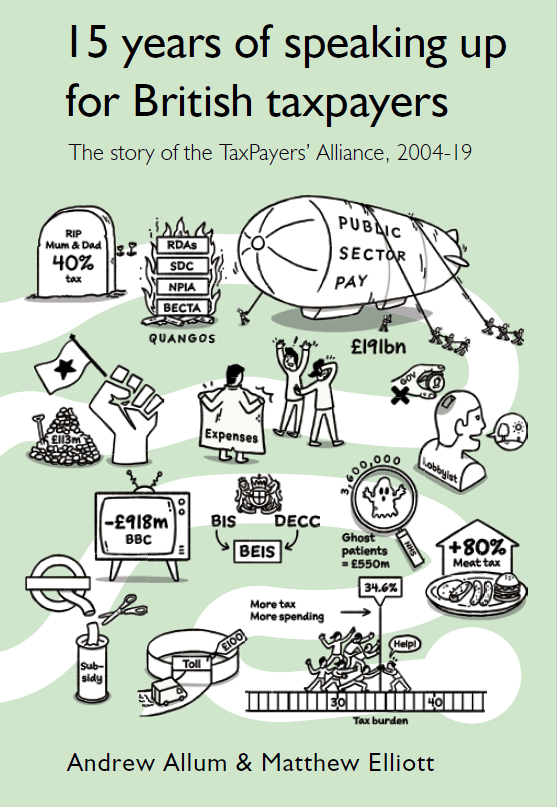 For the anniversary, we also celebrated the many victories we have had over the years, which you can read about below. 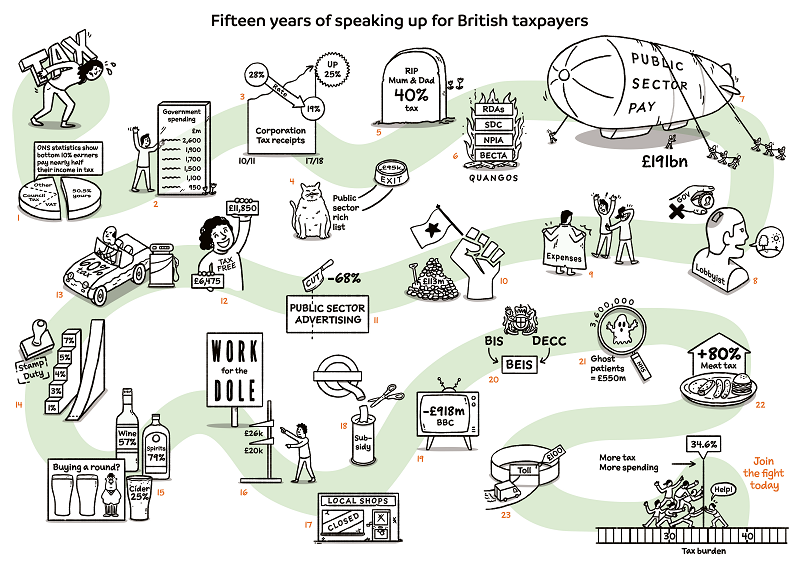 1. 2004 onwards: We speak up for British taxpayers, especially those on the lowest incomes. Our research showed that the poorest 10% of households pay nearly half their income in taxes.

2. 2004 onwards: Power should rest with those who pay the bills, not those who spend the money. Thanks to our campaigns, local authorities now have to publish all spending over £500.

3. 2006: Businesses don’t pay taxes, people do. We first fought for cuts to Corporation Tax in 2006 and rates have tumbled from 2010 onwards, boosting growth.

4. 2007 onwards: Taxpayers shouldn’t pay for eye-watering golden goodbyes. Our Public Sector and Town Hall Rich Lists led to the annual publication of all senior public sector salaries and a new cap of £95,000 on ‘exit payments’.

5. 2007: Taxpayers hate the Death Tax. Our partnership with the Daily Express saw George Osborne promise to lift the threshold to £1 million, with Labour backing down from an election as a result.

6. 2009: Quangos are expensive, opaque and unaccountable. Numerous quangos like the Carbon Trust, Becta, NPIA, the Regional Development Agencies and the Sustainable Development Commission have been abolished after our calls to cull
these bodies.

8. 2009: Taxpayers’ money should not be used to lobby for more spending and higher taxes. We revealed for the first time how councils were hiring lobbyists using taxpayers’ money and in August 2010, the Government announced a crack-down on taxpayer-funded lobbying by councils.

9. 2009: The cost of politics has to come down. We pushed for full disclosure of all MPs’ expenses.

10. 2010: Taxpayer funding of trade union activity should be kept to a minimum. Ministers responded to our largest ever Freedom of Information campaign by announcing cuts to the £113 million taxpayer subsidy to the trade unions we
exposed.

11. 2010: Information is one thing, propaganda is another. Before the election we called for a 50 per cent cut in public sector advertising spending – and it has since been reduced by 68 per cent.

12. 2012: Work should pay and taxes should be honest. Our Single Income Tax report recommended merging Income Tax and National Insurance with an increase in the Personal Allowance, which has shot up in the last few years.

13. 2012: Motorists are used as cash cows. Our Freeze Fuel Duty campaign played a major role in the recent freezes in Fuel Duty.

14. 2013: The ‘slab rate’ structure of Stamp Duty was highly distortionary. Stamp Out Stamp Duty was the first dedicated campaign on this pernicious tax and pushed the issue right up the media and political agenda, leading to the abolition of
the slab rate structure in 2014.

16. 2013: We should support the most vulnerable and help people back to work in a simpler welfare system. Our Work for the Dole proposal was adopted in September 2013, within a month of its publication.

17. 2013 onwards: Business rates are killing the high street. Our campaigning helped bring in a cap on the increase in business rates in England, introduce a discount of £1,000 and double small business rate relief for another
12 months.

18. 2015: Transport for London enjoyed a big subsidy, despite record passenger numbers. We recommended scrapping the subsidy in The Spending Plan, which we calculated could save taxpayers £750 million.

19. 2015: Regardless of income, pensioners were given free TV licences to watch the BBC at taxpayers’ expense. Our Spending Plan recommended the BBC paying for this out of its existing budget.

20. 2015: Government should be lean and responsive. We argued for merging essential functions of the Business and Energy departments.

21. 2015: Simple steps can be taken to save taxpayers’ money in the NHS. Our Spending Plan recommended tackling ‘ghost patients’ on GP registration lists, which was then taken up by government.

22. 2018 onwards: Hard-left campaigners never stop finding ways to boss us around. We are campaigning against a Meat Tax, which would hit the poorest taxpayers hardest and damage the food industry.

23. 2018: Taxes and levies must not be the default answer to real problems. We ran a grassroots campaign to oppose a new £100 ‘clean air’ charge in Southampton, with the Council now tackling air pollution with no new charges.

The importance of our message was recognised at an early stage. In 2006 we won the ConservativeHome ‘One to Watch’ award, and the Bumper Book of Government Waste was given the Atlas Sir Antony Fisher Memorial Award in 2007. In December 2007, the TPA won the Stockholm Network’s prestigious Golden Umbrella Award for Innovation and in 2008 was named ‘Pressure Group of the Year’ by the readers of Iain Dale’s Diary. In 2010, the TPA was awarded the Atlas Templeton Freedom Award for Initiative in Public Relations for pioneering work on public sector fiscal transparency. We went on to win the same award in 2012 for our ongoing campaigning on the taxpayer funding of trade unions.

In November 2013, we won two more prestigious honours. Public Affairs News recognised the success of MashBeerTax with their “Best In-House Campaign of the Year” award.  On the same evening, the Atlas Network in America announced that a distinguished panel of judges – including Arthur Brooks from the American Enterprise Institute and author Johan Norberg – had awarded the TPA the Templeton Freedom Award for the 2020 Tax Commission’s final report The Single Income Tax.

Announcing the award, Atlas CEO Brad Lips said that the

“TaxPayers’ Alliance has become such a force of nature in a relatively short amount of time. From impeccable research to clear messaging, they've really raised the bar for think tanks.”

Most recently, we were named 18th best advocacy think tank and 26th top transparency and good governance think tank in the world in the 2018 Global Go To Think Tank Index Report.