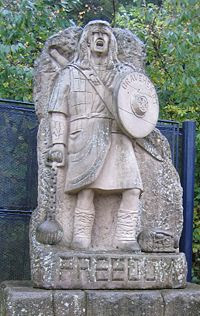 Our paper on the Barnett formula has stimulated considerable comment both in the mainstream media and the blogosphere (eg see the comments under Iain Dale's highly supportive post). We welcome the debate, and here are our responses to some of the more critical comments:

Some Scots are incensed by the idea that we're accusing them of sponging off the English.

But we aren't. All we're saying is that the Barnett formula has failed to correct a long-standing injustice to English taxpayers. Everybody - North and South of the border - pays into the same highly centralised taxation pot. But when it comes to divvying up the pot, the Scots get far bigger per capita helpings than the English. Which in an era of devolved government is manifestly unfair.

Some commenters say it isn't unfair because the Scots simply need more: the fortunate English should be willing to help their disadvantaged brothers and sisters in the North.

But, quite apart from the appallingly defeatist idea that the Scots are incapable of ever helping themselves like the Irish have done, is Scotland really that disadvantaged? Do the Scots really need 20-25% extra spending?


The truth is that even sympathetic "progressives" think it doesn't. When the ippr looked in detail at the Barnett Formula a few months ago, they concluded:

"A progressive funding system should place a particular emphasis on equity or fairness. Our original analysis, comparing the distribution of spending to two measures of need: levels of economic performance (GVA per head) and levels of poverty (households below 60 percent median income levels), finds the current distribution of spending is neither equitable nor fair. There is no clear relationship between spending and our chosen measures of need. In particular Scotland was found to be receiving more than its needs would suggest on both measures, while England received less."

And that's hardly surprising, given its historic origins. As explained in our paper, the premium is virtually an historic accident. It is almost entirely down to the fact that for nearly a century from 1888, Scotland continued to receive a constant share of spending on key public services, even though its population share was falling. Spending per capita therefore rose, reaching its current 20-25% premium level by the 1970s, where it has remained ever since - despite the fact that Barnett was introduced specifically to squeeze it back down.

"TPA paper misleads because it only covers identifiable spending"

Several commenters criticise us for only looking at so-called "identifiable spending" . That's the spending that HM Treasury has been able to identify as benefiting individuals in each specific region, and it excludes common services such as Defence, which are reckoned to benefit everyone.

To which our answer is that adding in such items almost certainly doesn't change The Big Picture. For one thing, identifiable spending now accounts for 83% of total spend (TME), so the unidentified items are very much in the minority. Moreover, there are swings as well as roundabouts - eg Scotland benefits disproportionately from spending on various big ticket items, such as the Navy's new carriers and the Trident subs.

But don't take our word for it. A recent analysis from the highly respected Oxford Economics (bigged up by several commenters) attempts to allocate the unidentifed element of spending across each of the regions.

For 2006-07, they estimate that total per capita spending in Scotland exceeded the UK average by between 18% and 23%. And the percentage premium without taking account of unidentifiable spending? 17%.

[NB - the OE paper quotes benchmark figs for the UK rather than England, but we know England gets less than the UK average, so we can reasonably assume the Scottish premium relative to England will be 2-3% higher than OE's quoted UK figs]

Our paper looks at the spending gap calculated on HMT's identifiable spending numbers. But to test the SNP claim that the extra spending has effectively been funded by Scotland's oil, we also compare it to a notional Scottish share of North Sea revenues. We find that over the 23 year period for which we have the Treasury numbers, the oil would have covered the gap in just 5 years, with a cumulative deficit of £26bn.

Several commenters have criticised us for failing to calculate an overall budgetary position, including Scotland's share of other taxes. Several even claim that a fuller analysis would show Scotland to be a net contributor to the public finances.

Two alternative studies are referenced to support that claim.

The first is from Oxford Economics. The Glasgow Herald apparently commissioned some work from them last year, which showed Scotland's budget to be balanced.

Unfortunately, we haven't been able to find the actual article itself, or the OE report. But according to the Guardian report of the report:

"Tax revenues from Scotland almost match the country's £49.2bn a year public spending - although only if all North Sea oil and gas revenues are attributed to Edinburgh, a controversial allocation.

The research, published yesterday by the Glasgow Herald, is based on Treasury figures in Whitehall, an analysis by consultants Oxford Economics and the newspaper's own calculations."

Almost match... all the N Sea revenues... controversial allocation... the newspaper's own calculations...

Here's what Oxford Economics themselves say in their own latest report, already quoted above. They estimate the net fiscal balance for all the regions of the UK (all oil revenues going to Scotland) and summarise their results on a per capita basis: 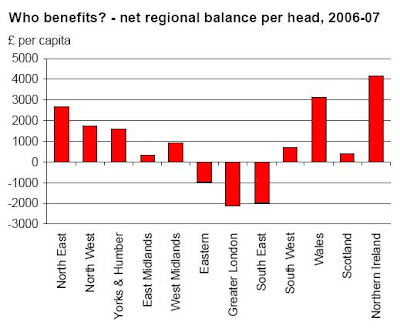 So yes, Scotland is close to balance, and much less of a burden than some other regions. But it is still a net recipient rather than a contributor. And that's with all the oil revenue.


The second referenced study is the Scottish Government's own report Government Expenditure and Revenue Scotland 2006-2007 (or GERS, as it's known in the trade).


We quote this study in our TPA report, and it is clearly a sound piece of work. While we would question some of its detailed allocations of both spending and revenue (eg they over-ride some of the accepted HM Treasury allocations), in Big Picture terms it looks about right. In particular, their allocation of oil revenues - 83% to Scotland based on a detailed geographical analysis - looks a lot more sensible than assuming Scotland gets the lot. 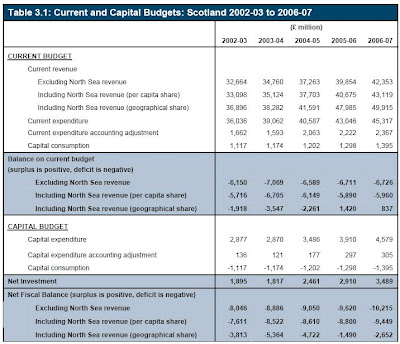 Unsurprisingly perhaps, the most quoted figure is the £837m current budget surplus in 2006-07. This is a serious detailed study showing Scotland - even with only 83% of the oil - is a net fiscal contributor, not a drain.


However, nobody denies that during periods of high oil prices, Scotland may well generate enough revenue to cover its high public spending. Which is precisely what's happened over the last few years.


But take a look at the earlier years in that GERS table: a cumulative deficit of £7.7bn. Why? Because the oil price hadn't yet started spiking up. And as we know, those first three years in the table are far more typical of the last 20. (Also note that in the next year of 2007-08 - despite the high oil price - N Sea revenues actually fell).


[NB There is a third study referenced by some commenters, including the SNP. It was produced by accountants Grant Thornton and reportedly shows Scotland with a £4.4bn surplus. We are still trying to obtain a copy]


Despite some robust comments about the TPA paper itself, it's good to see that most commenters do not disagree with our main policy thrust - the UK would benefit from a serious move towards fiscal decentralisation.


Let's hope the Calman Commission and the House of Lords enquiry take due note.


*Fact and fiction: In Stirling there is a statue of William Wallace (pic above). Rather depressingly, it is modelled not on some vision of Wallace himself, but on Mel Gibson in the Hollywood blockbuster Braveheart. No, really. Apparently, the Hollywood fantasy is preferred to the more complicated reality. We presumably don't need to spell out the parallels with the Scottish fiscal debate.