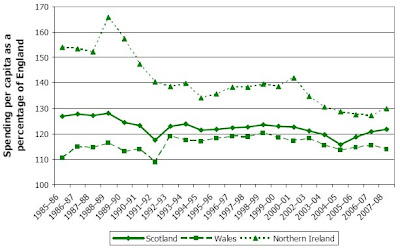 Last year we published a paper on the Barnett Formula calling for its abolition (see here and here). We argued that Scotland should be granted full fiscal autonomy, with responsibility for raising its own tax revenues.

Since then we've had a weighty report from the Calman Commission that fell some way short of what we proposed. And yesterday we got the government's response, which fell even shorter.

So a step along the high road to fiscal autonomy?

Well, possibly, but a very very small one.

To start with, the amount of revenue involved is only about 15% of the current block grant. Overall financing arrangements will remain hugely dominated by the Barnett Formula, which will remain in place, as is.

Second, the Scots will not be permitted to change the graduated structure of income tax: their Scottish local income tax will have to be at the same rate for all taxpayers right upthrough the tax bands. Which means for example, they will not be able to counteract the economic nonsense of the new 50p top rate (which as we know, will damage the economy and may actually reduce revenue - see this blog). Real fiscal autonomy would allow the Scots to make their own decisions on tax incidence, and would allow them to compete with England.

Third, the Scots will have no incentive to build their tax base. The Barnett Formula grant will be reduced by Whitehall's calculation of what a 10p rate would raise in Scotland. Which means that if the Scots manage to grow their economy and their tax base, they will lose grant funding, one-for-one. This is the classic problem with such grants - they incentivise inefficiency rather than local enterprise and effort.

So the real decisions on Scotland's fiscal autonomy still lie ahead.

But don't hold your breath. No London-based government has ever shown enthusiasm for surrendering meaningful tax power to Edinburgh. And since the collapse of their overblown banking system, the Scots have also taken a mighty step backwards.

The road to fiscal autonomy is a long one. And it will become increasingly stoney for cash-strapped English taxpayers who continue to fund much higher public spending in Scotland than they receive themselves.